UVALDE — Lauren Bohn and Michele Williams quietly walked through the crowd at a fragrant memorial of crosses and roses days after the worst school shooting in a decade.

Their message: “There can be triumph over tragedy for you as an individual. And we are here with you. You are not alone.”

They are survivors. The pair lived through Columbine, the 1999 shooting at a Colorado school that would become shorthand for savage massacres of innocent people.

Today, in Uvalde, many have locked arms in support of a largely Mexican-American community of nearly 16,000, coping with the deaths of 19 students and two teachers. Trauma experts say the road ahead will be rough. A big worry is the shortage of therapists in a rural area about 85 miles west of San Antonio and 60 miles from the Rio Grande.

Bohn was 15 and Williams 17 when two teens began shooting on April 20, 1999, killing 12 fellow students and a teacher. They became ministers at Red Rocks Church in Colorado and specialists in a trauma that snaps childhoods in two — with the tragedy defining life before and after.

Columbine High School shooting survivor Lauren Bohn, 39, comforts Uvalde resident Aliseya Luna, 14, after speaking with her at the town square in Uvalde, Texas, on Friday, May 27, 2022. Bohn flew from Littleton, Colorado, to be with the Uvalde community after the Robb Elementary School shooting because she said they have a shared experience now.(Elias Valverde II / Staff Photographer)

At a downtown plaza last week, Bohn, now 39, and Williams, 41, told their stories to people gathered to mourn. They gently introduced themselves and started conversations about what they went through in Colorado. Clusters of young people responded. Some cried. There were group hugs beneath the live oaks tied with baby blue and violet ribbons.

Bohn and Williams tried to be optimistic. They carried hand-lettered signs that read: “We are Columbine. We are Robb. We are with you.”

The women wanted people to lean on each other — and many were.

“Find your tribe, your people that you can be honest with in the dark days, and you yourself will be holding up someone in their moments,” Bohn said. “There is hope for tomorrow. Life will never be normal. It’s a new normal now.”

Uvalde residents said they welcome those who come from outside their city to help.

“I feel extremely overwhelmed by the show of support from everybody in the nation, just to our community,” said Trish Magdaleno, 49, who wore a burgundy T-shirt that read “Uvalde Strong.” “From everywhere, from law enforcement, to kids coming. I mean, it’s just everything, not just money, just the physical, the physical, coming down and saying, ‘We’re here for you.’”

Diana Karau of Uvalde spends time with a therapy dog ​​named Tritan before a vigil held in honor of the lives lost at Robb Elementary the day before at the Uvalde County Fairplex Arena, Wednesday, May 25, 2022 in Uvalde, Texas. (Josie Norris/The San Antonio Express-News via AP)(Josie Norris / ASSOCIATED PRESS)

San Antonio-based psychologist Amanda Weteman-Romine came from San Antonio to talk to people at the downtown memorial plaza, an epicenter for mourners where one can feel the grief as they approach.

Crosses a few feet high with each victim’s name are stacked with bouquets and teddy bears and unicorns.

The biggest hurdle will be time. It takes time to work through the trauma, Weteman-Romine said. “It’s going to be a lifelong work,” she said.

At the Uvalde plaza, Weteman-Romine handed out booklets, prepared by another San Antonio-based therapist, Amanda Duran. It’s for journaling through grief.

The grieving process will be different for different people. Journaling can be cathartic, especially for those uncomfortable with talking, she said. “But grieving is hard for everyone,” said Weteman-Romine, who graduated from Uvalde High School.

She worried about children, but also men because they are socialized to not show feelings.

She also worried about triggers, such as loud sounds. The brain holds on to painful memories, Weteman-Romine said, “because it’s trying to protect us and make sure that that painful thing does not happen again.” 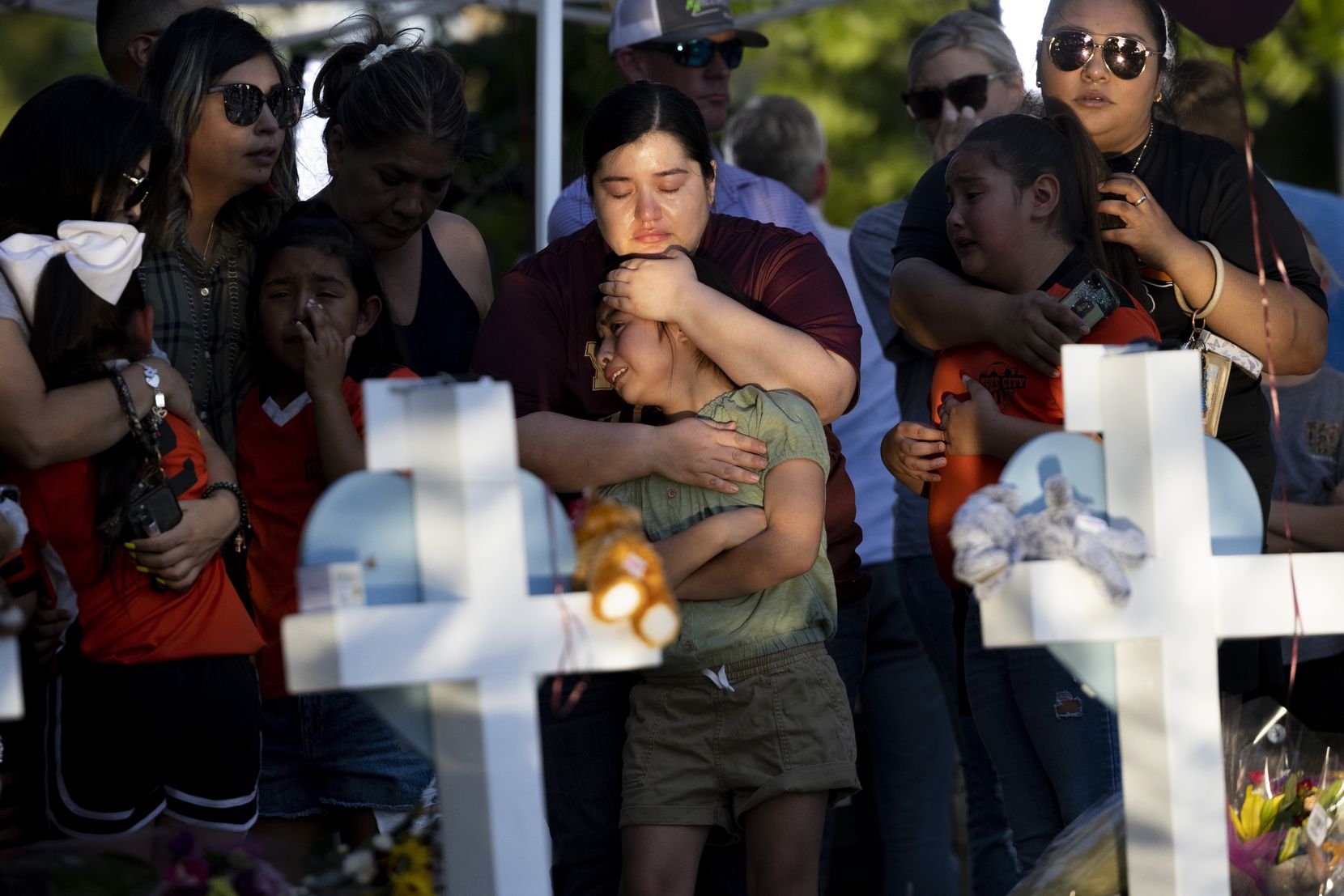 Geneva Uriegas (center) holds her daughter Gabriella as they stand in front of the cross honoring 10-year-old Tess Mata at the memorial for the 19 children and two adults killed in the Robb Elementary School Tuesday shooting at City Square on Thursday, May 26, 2022, in Uvalde, TX. The family is joined by other girls that participated in gymnastics and soccer with Mata. (Juan Figueroa / Staff Photographer)

Those with post-traumatic stress may be overly sensitive to anything that recalls the trauma, she said, but therapy can provide tools to help them cope. What helps is “checking the facts, recognizing that they’re actually safe” and that brings down the anxiety level, she said.

“Sometimes we don’t prioritize mental health treatment, especially in this state, and we end up waiting until you know we are really really struggling,” Weteman-Romine said.

There have been increasing calls for the state to do more to make sure people in places like Uvalde have access to the care they need.

After a press conference Friday with Texas Gov. Greg Abbott, a state senator representing Uvalde was focused on mental health and furious about the lack of resources dedicated to it.

By Tuesday, Abbott, a Republican up for reelection, announced he had made a disaster declaration for the city of Uvalde — a move that speeds resources to state and local health agencies. A spokeswoman said the declaration was actually issued Friday.

Texas ranked last in access to mental health care, according to a recent report by the nonprofit Mental Health America. It measured insurance rates to students who suffered “an emotional disturbance” and received care. 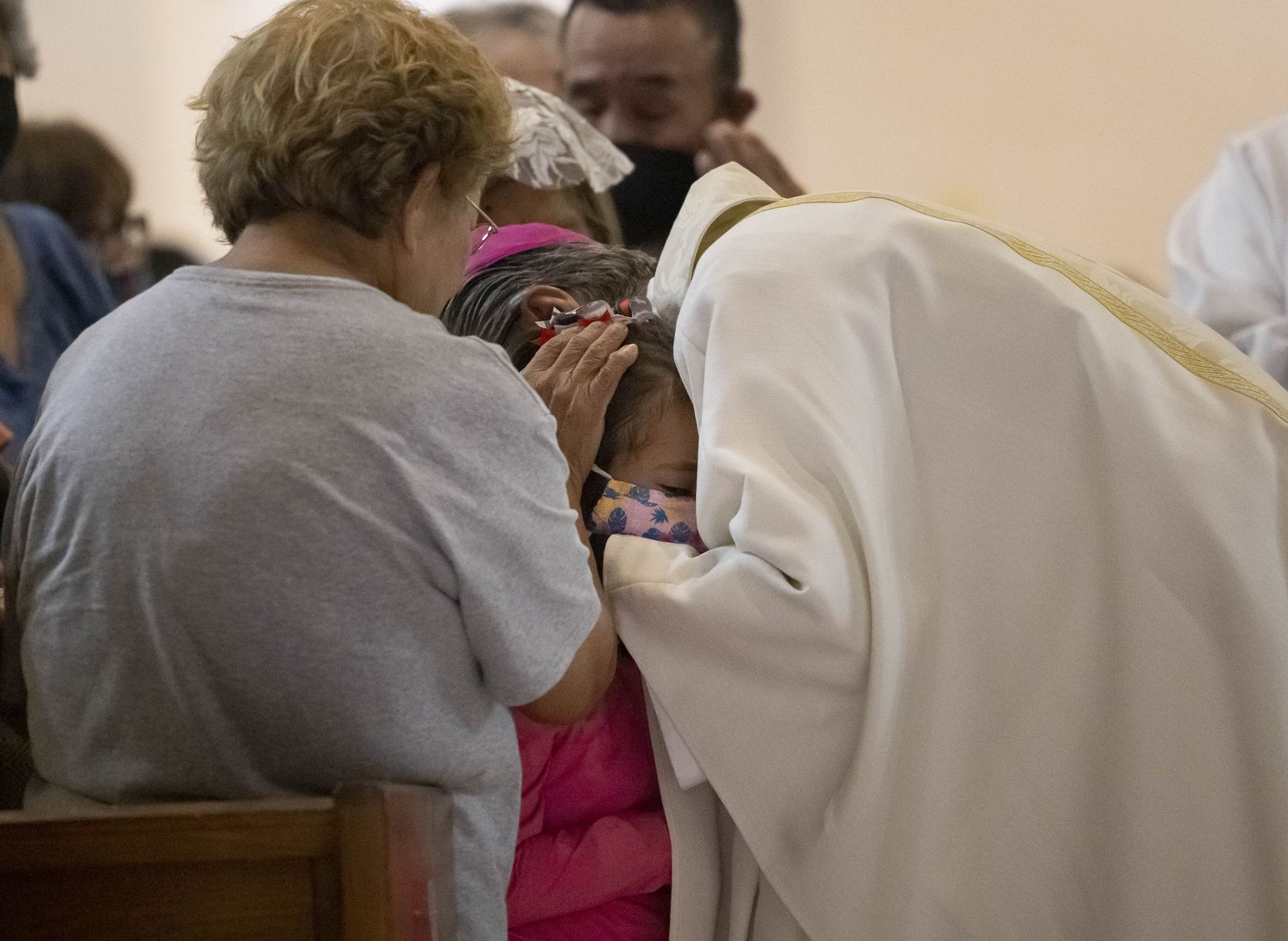 Archbishop Gustavo García-Siller prays over a child during an emergency mass held at Sacred Heart Catholic Church after nineteen children and two adults were killed in the shooting at Robb Elementary School on Tuesday, May 24, 2022, in Uvalde, TX. (Juan Figueroa / Staff Photographer)

Catholic Archbishop Gustavo García-Siller said he, too, worried about how stretched the counselors had become. García-Siller, who has a degree in psychology, said he can see the fatigue in the faces of exhausted counselors at the Sacred Heart Catholic School in Uvalde. There the counselors are speaking with children about what happened. García-Siller has told them they must start taking shifts, and then rest.

The 65-year-old has new pain in his body and says he can only imagine how it must be for those with children. His next worry? “I’m sure that this next phase will be anger,” said García-Siller in a voice sounding raspy from so much talking. “And maybe it will be a crisis of faith.”

In the interim, the memorial at the downtown plaza continues to draw hundreds of people each day in acts of solidarity. It plays to all the senses. A gurgling fountain of water is at its center. There are candles with images of the Virgin of Guadalupe, an icon of the Latino Catholic church. Some have left favorite foods of loved ones, a tradition in Mexican altars during Día de los Muertos. A big bag of spicy Takis chips and cups of noodles peek out in nests of flowers. 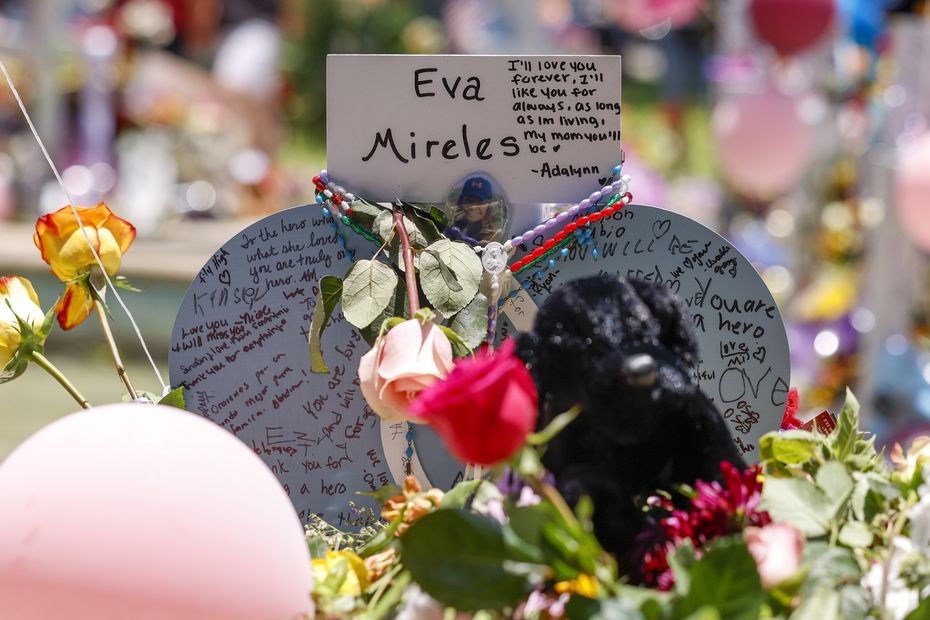 A message on the cross for teacher Eva Mireles, who died trying to save her students, reads: “I’ll miss you forever my beautiful momma — Addy.” She punctuated that with a little heart.

A cross for 10-year-old Annabell Guadalupe Rodriguez carried multiple rosaries in red, green, yellow, blue, violet and maroon. “God is with you,” reads one inscription.

Handlers of comfort dogs made the rounds around the green grass of the plaza, as small children ran up to pet and hug the furry creatures.

For those moments, they were free to be children again.

UD report examines the state of addiction treatment in Delaware