BC Center for Substance Use: Scale up BC drug-checking programs

Author of the article: 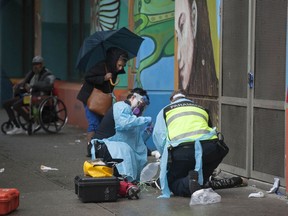 Checking illicit drugs for deadly toxins is the best option to prevent fatal overdoses without a safer supply, but that service should be expanded to rural and remote communities in British Columbia, says the manager of a drug-checking program being evaluated by the BC Center for Substance use.

Jenny Matthews said drug users who live in non-urban areas often can’t get their drugs tested for contaminants, including high concentrations of fentanyl and, increasingly, benzodiazepines, for which the overdose-reversing medication naloxone is not as effective.

“Ideally, we want there to be a safer supply so that people don’t have to fight for access to drug checking, but in the short term we want to try and increase access to testing,” Matthews said.

Health authorities and non-profit groups run drug-checking programs in BC using two technologies: take-home test strips that detect the presence of fentanyl or benzodiazepines; and a device called a spectrometer, which is operated by a technician at overdose prevention sites to look for a variety of substances. Results are available in five to 10 minutes.

Matthews said there are 12 spectrometers in the province — five each in the Vancouver Coastal and Interior Health regions, one each in the Fraser and Vancouver Island regions and none in Northern Health.

Data from tiny samples of checked drugs is entered into a provincial database, which is used by the BC Center for Substance Use to report trends on what’s found in contaminated drugs as a part of a research project funded by Health Canada.

As fentanyl became a dominant drug in BC, health authorities were issuing alerts about the presence of the opioid in street drugs that were killing so-called opioid naive people with little to no tolerance to it.

Those who developed an addiction to fentanyl, which is 100 times more potent compared with heroin or morphine, needed more of it to stave off withdrawal symptoms like vomiting, nausea and sweating, leading to greater amounts of it being sold in other drugs.

This week, Interior Health issued an urgent drug alert about a high risk of fatal overdose from tested drugs that contain up to 55 per cent fentanyl, up from 10 per cent, and 25 per cent benzodiazepine, often prescribed to treat conditions like anxiety.

dr Carol Fenton, a medical health officer with Interior Health, said there are limitations to checking samples to protect those who are at risk of overdose.

“The problem is we don’t have a really good sample of what’s going on the streets because our drug-checking data is only those people who are interested in and willing to bring in their drugs and get them checked. So, I would imagine that’s a relatively small proportion of people using the street supply,” she said.

For Matthews, raising awareness about getting drugs tested is crucial for users smoking, snorting and injecting them.

“What’s really important is that when people are getting their drugs tested, they are having conversations with a technician,” she said, adding the current pilot programs need core funding so more technicians are trained, which would allow the service to be scaled up.

“We’re all hoping that we would never need drug checking and that people could rely on a good supply that was safe to use.”

The coroners’ service says there were a record of 2,224 suspected overdose deaths in the province last year, a 26 per cent jump over the previous year.

More news, fewer ads, faster load time: Get unlimited, ad-lite access to the Vancouver Sun, the Province, National Post and 13 other Canadian news sites for just $14/month or $140/year. Subscribe now through the Vancouver Sun or The Province.

Sign up to receive daily headline news from the Vancouver Sun, a division of Postmedia Network Inc.

The next issue of Vancouver Sun Headline News will be in your inbox soon.