This time, the actress has decided to open up a little more than usual.

Bella Hadid has always been honest about her mental health. She has never missed an opportunity where she has kept her fans in the dark about how she is handling it.

Once again, the star opened up about her mental health-related struggles.

Bella Hadid has long struggled with “anxiety” and “depression.” She always makes sure to keep her fans updated. This time, however, things were a bit different as she was more outspoken than usual.

Last year, she shared a series of crying selfies on Instagram. She replied to Willow Smith and spoke about her mental health cases.

“It made me feel a little less alone and that’s why I wanted to post this.”

In a recent interview, she spoke about her struggles with “alcohol” and how she deals with it.

The 25-year-old model has remained open and transparent about her past mental health struggles. Her problems related to drinking and the effects of a bottle of alcohol on her mental health.

She began her interview with, “I’ve done my fair share of drinking.”

“I loved alcohol and it got to the point where even I started canceling nights out that I felt like I couldn’t control myself,” she said.

The model also revealed her struggles and how her brain scans have started showing the effects of her drinking problems. She explained that it was “a lot harder for her to pick up the jar” after she found out the scan results.

She went on to specify how happy she was after staying away from drinking.

“I don’t feel the need [to drink alcohol] because I know how it’s going to affect me at 3 a.m. when I wake up with terrible anxiety and I think about that one thing I said five years ago when I graduated from high school,” she said.

She continued, saying, “Here’s just this never-ending effect of essentially, you know, pain and stress over those few drinks that didn’t really do much, you know?”

Indeed, it was difficult for her to stay away from alcohol, which kept her from sleeping.

“I don’t take sleeping pills anymore. When I flew so much, it was the only way I didn’t get jetlagged.”

In addition, the actress was arrested at the age of 17 for driving under the influence of alcohol.

Bella’s mental health issues have been present since November

Speaking about her crying pictures, which went viral in November, she said.

“Over the past year it’s been really important for me to learn that it doesn’t matter if people talk about my style or if they like it or not because it’s my style,” she said.

She added: “When I leave the house in the morning I think: does this make me happy? Do I feel good in it and do I feel comfortable?”

According to her, “social media” is a lie, as she said.

“Even though it looks so pretty on Instagram, at the end of the day we’re all cut from the same cloth. I felt like being able to tell my truth was good for me, and at some point I couldn’t post nice pictures anymore. I was over it.”

“I was having really depressive episodes and my mom or my doctor would ask how I was and instead of having to text them back, I just sent them a photo.”

She added, “It was the easiest thing for me at the time because I could never explain how I felt.”

She mentioned her crying pictures and said. 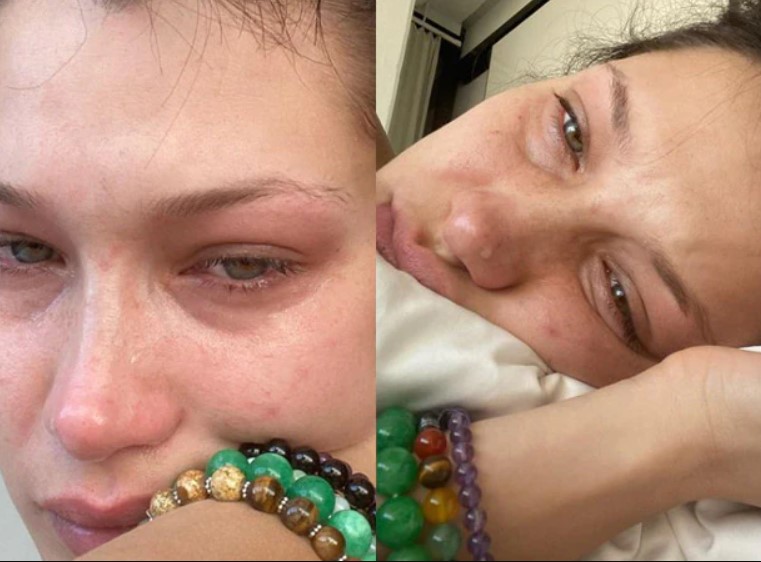 “I was in just excruciating and debilitating mental and physical pain, and I didn’t know why. That was in the last three years,” she continued. “[When I posted them]I wanted to make sure anyone who was feeling this way knew that it was okay to feel this way.”

Well we hope for a speedy recovery for Bella. What are your thoughts on the subject? Let us know.