According to a recent study published in the journal JAMA Psychiatry, Black Americans saw the sharpest increase in drug mortality rates of any demographic group in 2020, outpacing the rate among white Americans for the first time since 1999.

dr Helen Hansen, a professor of psychiatry at UCLA’s David Geffen School of Medicine who co-authored the study with Joseph R. Friedman, spoke to Yahoo News about the various factors, such as systemic racial and socioeconomic inequalities and policies, that have played a significant role in the crisis among Black Americans.

“For the past 20 years, what the media has focused on is the very high death rate among white Americans. And there has been a certain shock and surprise because of all of the stereotypes about the racial identity of people who are addicted in this country,” Hansen stated. “What Joe Friedman uncovered was, not only is it and has it not been a white crisis all along, but starting in 2017 and then sharply accelerating in 2020, the Black overdose death rate really shot up.”

Black men were the most affected, with more than 15,200 drug overdose deaths in 2020, more than double the number in 2016. The Pew Research Center said the death rate among the group increased sharply by 213% from 2015, when Black men were less likely than white men and Native American and Alaskan Native men to die from overdoses. Mortality rates from drug overdoses among men in every other major racial or ethnic group have risen at a slower pace.

According to the CDC, the overdose death rate has also risen sharply among Black women — 144% between 2015 and 2020. This rate surpasses the percentage increases among women in every other racial or ethnic group during the same period.

A separate study that Friedman led and Hansen co-authored found that overdose deaths among people of high school age greatly accelerated under COVID, in particular among Black and Latinx Americans.

“The pandemic has since disproportionately worsened a wide range of health, social, and economic outcomes among racial and ethnic minoritized communities,” Friedman and Hansen wrote of the study results. “Careful attention to examining these trends by race and ethnicity is therefore warranted.”

Hansen also points out that people used drugs alone more often than they had pre-COVID as the world became more isolating.

“In social isolation, not only did COVID limit people’s access to drug treatment and regular health care, but they can’t see people who might have given them social support in recovery, who might have even watched them while they were using drugs, to make sure that they don’t overdose and be available with Naloxone reversal kits in case they overdosed.”

The widespread distribution of toxic illicit drug supply of synthetic opioids like fentanyl — which Mexican drug cartels mix into many street drugs and smuggle into the US — has also made overdoses, most likely unintentional, more common. According to the Washington Post, 94% of opioid overdose deaths in DC involved fentanyl.

“One reason that the drug cartels like [synthetic opioids] is that they are so potent,” Hansen said. “You only need a small amount in order to make quite a few sales. Heroin is much bulkier. If you need a hundred times as much heroin to get the same effect, getting that across borders, and then with COVID borders being even more tightly controlled, it’s much easier to smuggle in the small amounts of the ultrapotent synthetic opioids.”

Hansen also stated the case, supported by well-established studies, that the residue of misguided policies like the war on drugs waged by the Reagan administration in the 1980s, and perpetuated by later administrations, has led to excessively harsh sentencing requirements and mass incarceration of Black people. This phenomenon produced a profound and unequal outcome for communities of color and is a huge overdose risk factor after release.

“Black men are six times as likely as white men in the US to serve time,” Hansen emphasized. “If you’ve been using opioids before you got arrested, your tolerance is probably gone because you haven’t had access regularly to opioids in jail or prison. So your body is very sensitive to opioids,” she said, adding that Black women are increasingly incarcerated at higher rates than white women.

People who try to reenter society also have to overcome sometimes insurmountable barriers where many factors converge, leading to overdose deaths among Black Americans. 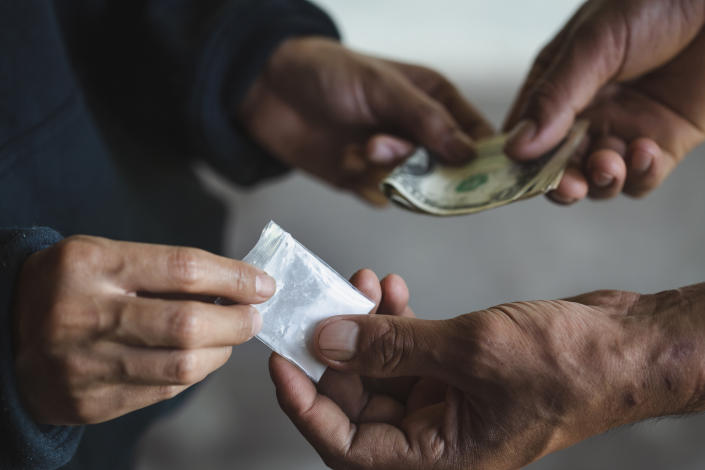 A drug user buying a dose from a drug dealer. (Getty Images)

“You probably don’t know who’s selling to you because you’ve lost your contact on the street. If you wanted to stop using opioids, you’re very vulnerable to relapse because you’re under tremendous social pressure,” Hansen said. “Just having been incarcerated means you don’t qualify for a whole lot of social benefits. You’re likely not to have health insurance or to have access to either drug treatment or regular health care, not to mention that you’re not going to have access to harm reduction either at the same rates, such as the Naloxone universal kit. ”

“Racial assumptions about who’s at risk of addiction led to deregulation of OxyContin and sister products in the ’90s and created the very opioid crisis that we saw,” Hansen stated.

Hansen said the shift created two tiers in the country: a criminalized tier — which over-polices, over-arrests and over-incarcerates Black and brown Americans — and a medicalized tier that gave white people more access to a safer drug supply and treatment. During this period, peaking in 2008, mass incarceration on drug charges stayed intact and Black and brown Americans continued to bear the brunt of the criminalization of drugs.

“The easiest way to overcome challenges to reentry into society is to end our addiction to mass incarceration of nonviolent offenders and stop taking people away from society,” Glenn Funk, district attorney of Nashville, Tenn., told Yahoo News. “We cannot incarcerate our way out of public health crises.”

Hansen points to effective treatments for substance use disorder, such as buprenorphine, a drug that reduces withdrawal symptoms and cravings. Prescriptions for the opioid are uncommon in the Black community. Methadone, which is less effective, is more common in Black communities.

Drug policymakers also began to observe close associations between overdose deaths in blue-collar white communities and deindustrialization, which outsourced labor in the manufacturing and mining industries and left people without jobs.

“These overdoses are deaths of despair, and they’re calling for economic development in those communities,” Hansen said. But the jarring statistics have caused various health groups to take notice of the fact that members of the Black community have long been victims of “deaths of despair.”

“In order to be truly successful in preventing and reducing drug overdose deaths, especially among those hardest hit,” Stephanie Strutner, head of Prevention Alliance of Tennessee, said, “we must emphasize the importance of primary prevention and enable through funding and empower local communities to use data to inform efforts to identify local conditions in their community.”

Strutner added that primary prevention is cost-effective even in places like Tennessee, which, according to a 2021 American Journal of Public Health study authored by Friedman, saw an increase of 44% in overdose deaths compared with 2019, making it the state’s deadliest year ever. She said an estimated $4.60 is saved for every dollar the state spends on prevention. In some local counties, more than $20 is saved.

Hansen noted that the conservative world of academic medicine has started to embrace terms such as “structural racism” in its articles. She hopes that as the US reckons with racial injustice and inequalities uncovered by the pandemic, the conversation around substance use disorder can be looked at through a different lens.

“We’re going to be forced to look at health reform and economic development. We’re being forced to look at the racial divide in our country, as well as mass incarceration, which has largely been driven by drug war policies. This is a moment to really start to unpack and reframe the overdose problem and other problems in terms of racial equity,” she said.