On June 29, Canadian federal and provincial governments reached a proposed $150-million settlement with Purdue Pharma Canada, makers of OxyContin, an opioid-based pain medication. The settlement is intended to recover the health-care costs related to the damaging effects from the sale and marketing of OxyContin.

While this is the largest settlement of a governmental health-care cost claim in Canadian history, it is also a paltry amount compared to the approximately US$6 billion that Purdue will pay in the United States. A population-equivalent Canadian settlement would have been closer to CA$900 million.

Until this $150 million fine, there is no record of any drug company ever having been fined for its promotion of one of its prescription drug products in Canada. Despite illegal drug promotion documented in the United States, Health Canada did not investigate whether such practices were also present in Canada. One example was the distribution of 15,000 copies of a video in the US claiming, without any substantiation, that opioids caused addiction in fewer than one in 100 patients.

When asked why, agency officials responded that Health Canada “has not been made aware of any specific similar issue in Canada and has not received complaints.”

Equally concerned, however, is the intense focus on financial settlements at the expense of regulatory changes.

Since the opioid crisis arose, researchers and journalists have identified a range of strategies and policy loopholes that companies took advantage of to push their products. These included:

Despite this knowledge, virtually all of these strategies remain entirely legal.

Protesters outside a Boston, Mass. courthouse in 2019, during a lawsuit against Purdue Pharma over its role in the national drug epidemic. The company’s US settlements for OxyContin lawsuits total about US$6 billion.
(AP Photo/Charles Krupa)

Transparency around pharmaceutical funding of healthcare professionals and non-profit organizations remains virtually non-existent in Canada. The United States passed the Physician Payments Sunshine Act in 2010 requiring transparency of financial relationships between physicians and the health-care industry. Yet no such system of transparency exists in Canada.

In fact, the federal government has explicitly rejected setting up a similar mechanism. The one attempt to do so in Ontario was terminated in 2018 when Doug Ford’s Progressive Conservatives took office. Such a system would have significantly increased transparency around the types of physician payments that directly influenced opioid prescription patterns.

Pharmaceutical companies are still permitted to fund groups putting on accredited medical education events for Canadian doctors. This is despite significant evidence that industry funding leads to a bias in prescriptions and few improvements in prescribing.

This type of funded “medical education” was one of the main avenues through which Purdue Pharma and other companies managed to convince health-care professionals of the benefits of their products, while minimizing the products’ overall risk of addiction.

There is little evidence that removing industry funding would create an information gap, and it is likely to drastically reduce overall industry influence over the profession. Yet the federal government has often done little to use such practices to ensure appropriate drug prescribing and use, putting it at odds with governments in many other wealthy industrialized countries. 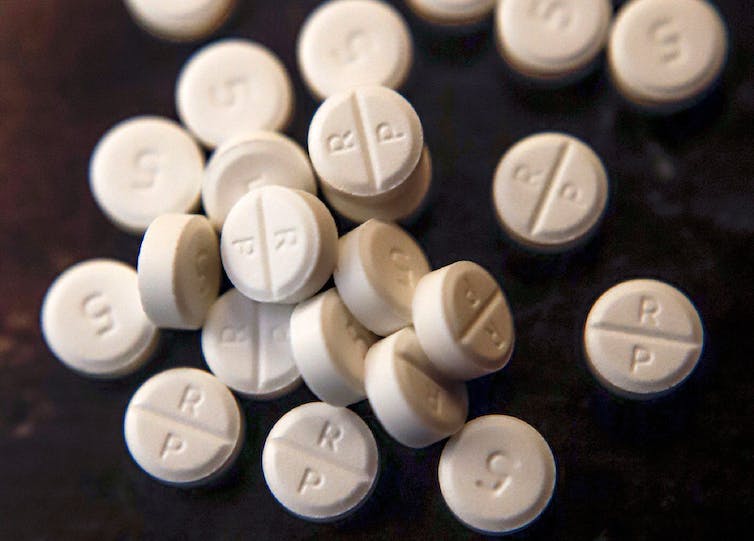 Since the opioid crisis arose, researchers and journalists have identified a range of strategies and policy loopholes that companies took advantage of to push their products.
(AP Photo/Keith Srakocic)

Canadian regulators have revealed little about how they plan to reduce industry influence over product monographs, which provide detailed information for doctors about specific drugs.

Health Canada states that a product monograph should be a “factual, scientific document on a drug product … devoid of promotional material.”

Despite this, there has been no formal inquiry into how this scientific document could be so significantly affected by industry interests, or how to prevent similar influence from recurring.

The pharmaceutical industry continues to provide non-research-related transfers to health-care professionals. These transfers include gifts of food and drink, all expenses paid travel to conferences and marketing-related consultancies. Again, this form of funding was repeatedly used by opioid manufacturers to influence health-care professionals, with companies even flying them out to exotic locations to listen to “key opinion leaders” speak on the benefits of Oxycontin and other opioids.

Despite virtually no rationale for the “educational” value of these events, such financial transfers continue today. In 2020, 10 of the 47 drug company members of Innovative Medicines Canada, the organization that represents the pharmaceutical industry, spent over $28 million on fees and travel for health-care providers.

The settlement with Purdue Pharma Canada is frustratingly small in comparison to the billions in health-care costs of the opioid crisis. But it also shouldn’t distract from the bigger issue: despite the many lessons learned from the crisis, there have been very few regulatory changes made in Canada since.

Unless something radically changes in how the pharmaceutical industry is regulated, there is little reason to assume a similar crisis won’t occur again.

From tough love to interventions, what works when a loved…