Celebrity makeup artist Laney Chantal, whose full name is Alaina Chantal Parkhurst, died from an ‘accidental drug overdose’ on Halloween aged 33, according to a public obituary written by her family.

In a post to Facebook on Friday, her mother Brandy Parkhurst, revealed that the 33-year-old had been struggling with multiple mental illnesses.

She went on to say that her daughter did not ‘commit suicide’ or die from ‘street drugs’ but had ‘overmedicated on prescribed medicines’ following a ‘severe anxiety attack’ that night.

Chantal was known for her appearance on reality TV competition Face Off and worked as the lead makeup artists for Lil Nas X’s ‘Montero’ which won video of the year at MTV’s video music awards in 2021.

Six months before her death Chantal posted a picture of a pink coffin.

Her family said she ‘struggled with various mental illnesses throughout her adult life’ and asked for donations in her honor to contribute to mental health awareness.

Parkhurst said the family had added a ’cause of death to the obituary’ because they ‘didn’t want rumors started’ about how her daughter died.

‘Let me make this clear. Laney did not commit suicide, she wasn’t ‘using’, she did not buy street drugs, and she didn’t get ‘bad stuff’ at Hallowicked,’ the post read.

‘As our family goes about making funeral/memorial arrangements for our daughter/sister/aunt/niece, something I wouldn’t wish on anyone, I’m going to let everyone know what caused Alaina’s death.’ 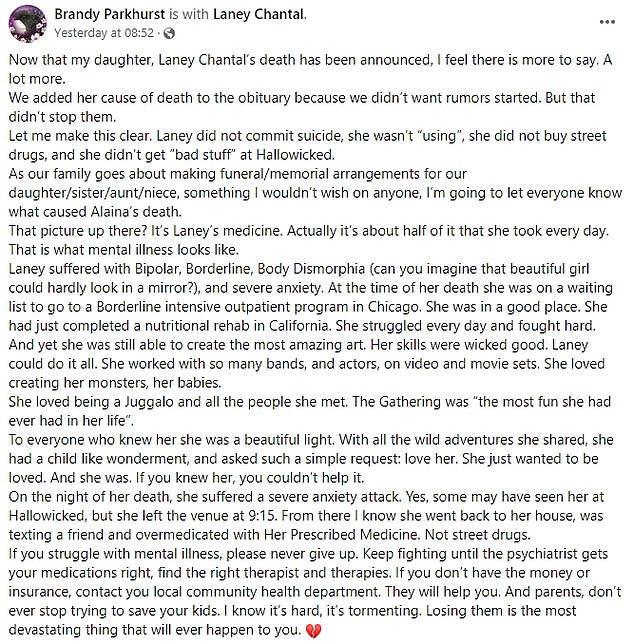 In a post to Facebook on Friday, her mother Brandy Parkhurst, revealed that the 33-year-old had been struggling with multiple mental illnesses 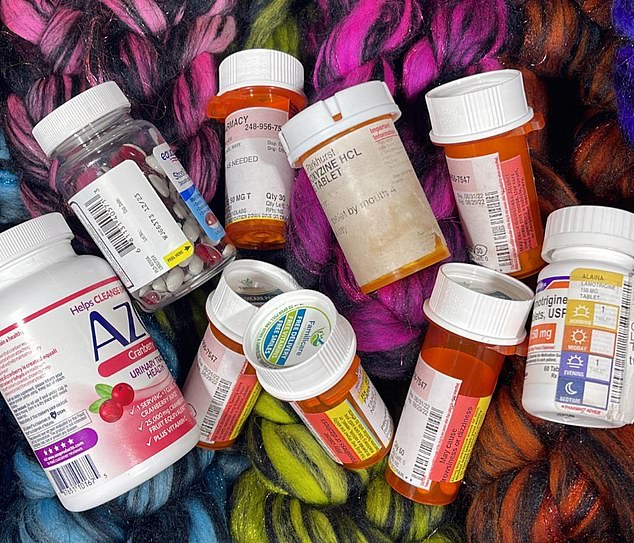 As part of the post Chantal’s mother posted a picture of what appear to be 9 medicine bottles and said ‘That picture up there? It’s Laney’s medicine.’

‘Actually it’s about half of it that she took every day. That is what mental illness looks like,’ she continued.

‘Laney suffered with Bipolar, Borderline, Body Dysmorphia (can you imagine that beautiful girl could hardly look in a mirror?), and severe anxiety.

‘At the time of her death she was on a waiting list to go to a Borderline intensive outpatient program in Chicago.’

Parkhurst said that she had been in a ‘good place’ having just completed a nutritional rehab in California.

‘She struggled every day and fought hard, and yet she was still able to create the most amazing art. Her skills were wicked good,’ the post read.

‘Laney could do it all. She worked with so many bands, and actors, on video and movie sets. She loved creating her monsters, her babies. 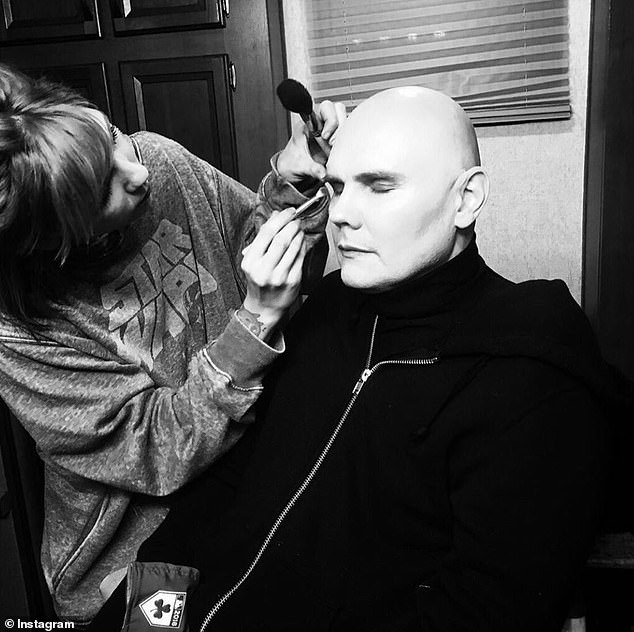 ‘She loved being a Juggalo and all the people she met. The Gathering was ‘the most fun she had ever had in her life’.

Parkhurst goes on to say that on the night of her death Chantal ‘suffered a severe anxiety attack.’

‘Yes, some may have seen her at Hallowicked, but she left the venue at 9.15,’ the post continued.

‘From there I know she went back to her house, was texting a friend and overmedicated with her prescribed medicine. Not street drugs.’

Parkhurst finished the post by telling those who struggled with mental illness to ‘never give up.’

‘Keep fighting until the psychiatrist gets your medications right, find the right therapist and therapies,’ the post read.

‘If you don’t have the money or insurance, contact your local community health department. They will help you.

‘And parents, don’t ever stop trying to save your kids. I know it’s hard, it’s tormenting. Losing them is the most devastating thing that will ever happen to you.’

Family and friends paid their respects to the 33-year-old makeup artist remembering her as someone who was ‘deeply loved by all.’ 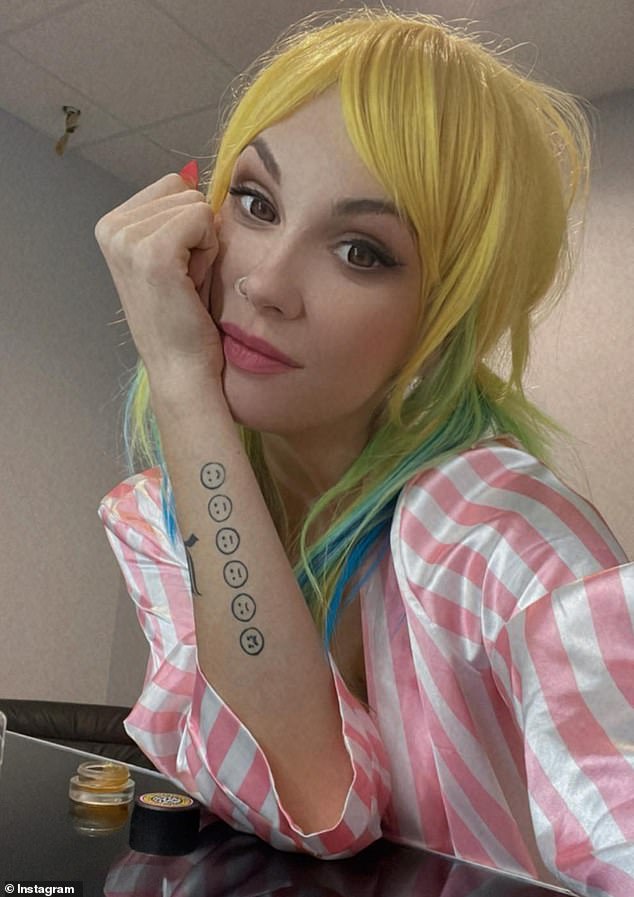 Her family remembered the young makeup artist as someone who ‘put her whole self, body, mind and soul into her jobs’

‘Her family and friends meant the world to her and gathering with them during the holidays were some of her favorite and most anticipated times,’ her family wrote.

Chantal started in the makeup industry in Los Angeles in 2008, where she attended Cinema Makeup School. Here, she received her accreditation to work as a special effects makeup artist.

‘Alaina put her whole self, body, mind and soul into her jobs, no matter the size,’ her family said.

‘Her artistic ability and visions quickly set her apart from other artists in her field and her portfolio blossomed.

‘Laney, as she was known by many, lived her life to the fullest, and accomplished more in her short time on earth, than most do in a full lifetime.’

Chantal grew up in Manitou Beach with her parents and two older sisters and was born February 20 1989.

‘Her art and spirit are unparalleled, making the world a better place. My last memory with her was riding on four wheelers in the woods in Michigan until sunset,’ Accarino wrote on Instagram.

‘Laney, you deserved the world and were loved by so many people.

‘You forever changed my life and taught me, unconditional love. You were a gift and I cherish every moment spent with you. I will carry you in my heart forever.’

Chantal was recognized for her time on season 5 of Face Off which aired in 2013, she was most notable for being the second contestant to voluntarily leave the competition.