Correcting the Record on Opioid Lawsuits Against Walmart

On top of that, Walmart has blocked thousands of questionable doctors from having their opioid prescriptions filled by any of our pharmacists, as part of our good-faith efforts to help address the opioid crisis.

As a result, many health regulators, medical groups, doctors and patients say that Walmart is going too far in refusing to fill opioid prescriptions—and even say we are improperly interfering in the doctor-patient relationship and potentially harming patients who need their medicine.

This is a big reason why plaintiff-lawyer driven lawsuits brought around the country against Walmart and other pharmacies are misguided and dangerous to public health. In search of deep pockets, plaintiffs’ lawyers representing cities, counties and others are pushing a legal theory that pharmacies should be held responsible for the opioid crisis. In fact, courts around the country have rejected plaintiffs’ novel “public nuisance” liability theories in lawsuits in Arkansas, Connecticut, Delaware, Illinois, California, Oklahoma, North Dakota and South Dakota. As the Wall Street Journal said, it makes no sense to punish pharmacies for “filling legal prescriptions for a legal substance for real patients from licensed doctors.”

One serious and big-picture problem with the plaintiffs’ attempt to turn pharmacists and pharmacies into the “doctor police” is that it forces them to come between doctors and their patients in a way Congress never intended, and federal and state health regulators say isn ‘t allowed. And many patients say that pharmacies are preventing them from getting needed medicine.

The Lawsuits: Putting Pharmacists Between a Rock and a Hard Place

Think about what happens when a patient brings an opioid prescription from a doctor into a pharmacy to fill.

The plaintiffs’ lawsuits raise a different issue: What should a pharmacist do with a prescription that is valid on its face and written by a state-licensed and DEA-approved doctor?

Either decision carries risks with it”the sword of Damocles hanging over Walmart and its pharmacists.”

In fact, a class action lawsuit says pharmacies are harming patients and illegally discriminating against them by not filling needed opioid prescriptions.

Even the DEA has expressed concern that “legitimate patients” are sometimes unable to “get their prescription for pain medications filled at large retail pharmacies.”

In addition to patient criticisms, state medical and pharmacy boards all over the country have criticized, investigated and threatened Walmart and our pharmacists for going too far in refusing to fill opioid prescriptions.

Complaints against Walmart and its pharmacists for refusing to fill opioid prescriptions have also been filed with, or pursued by, many Boards of Pharmacy or Medicine across the country, including those in dark blue above.

Below are just a few examples: 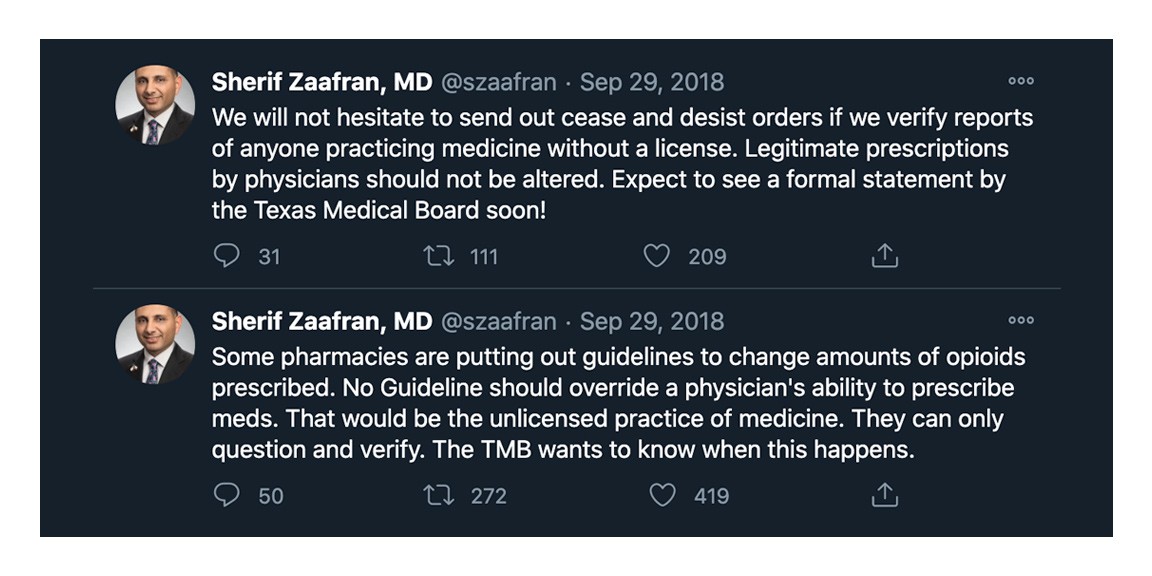 The list goes on, and you can read more examples in this news story or in this legal filing by Walmart.

Pharmacists and pharmacies also get contradictory guidance from federal health agencies and even the DEA that often disagrees with the plaintiffs’ theory that pharmacists should interfere with a doctor’s individualized medical judgment. Here are just a few examples, but there are many more. 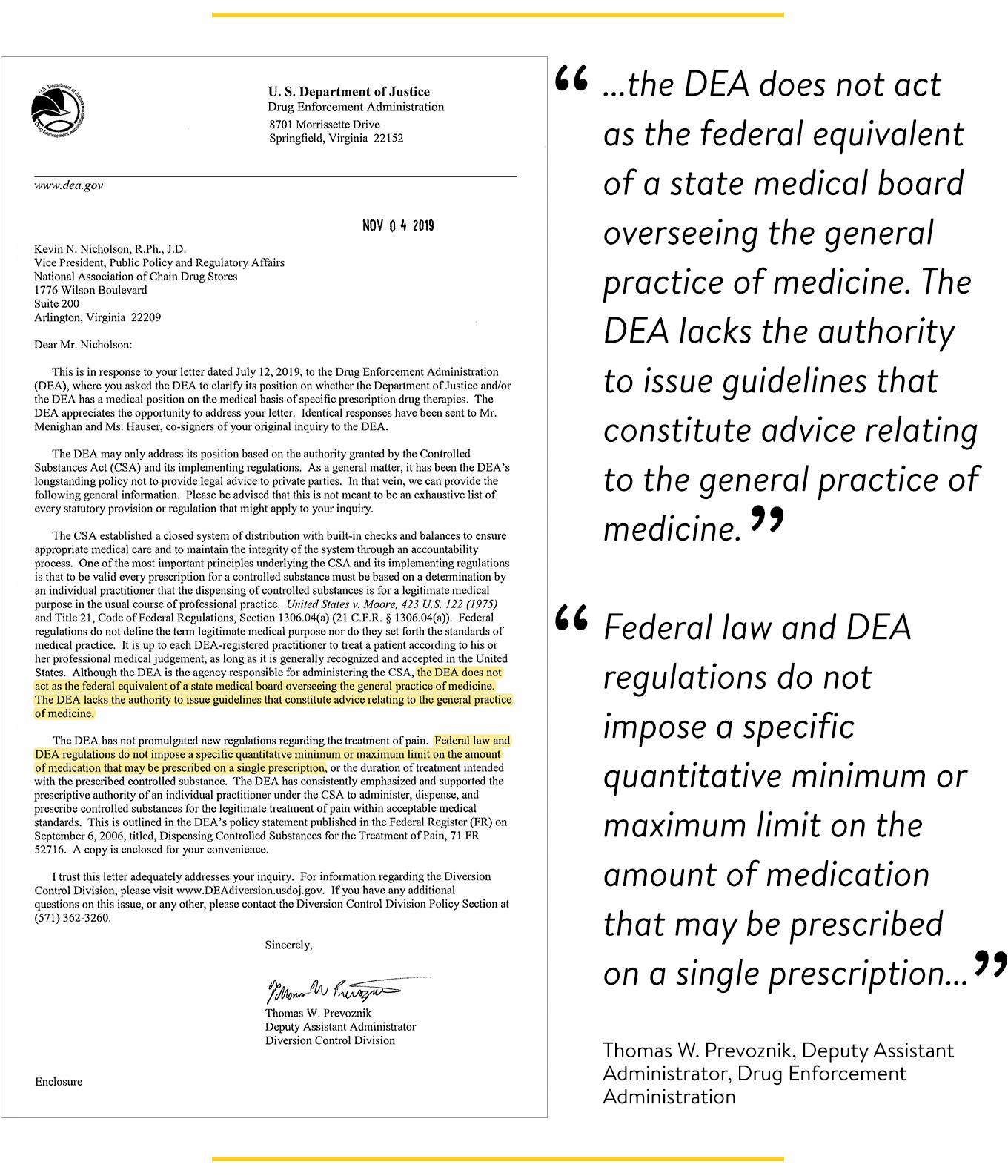 And it’s not just state and federal health regulators saying pharmacists and pharmacies are going too far in refusing to fill opioid prescriptions—doctors are also weighing in. 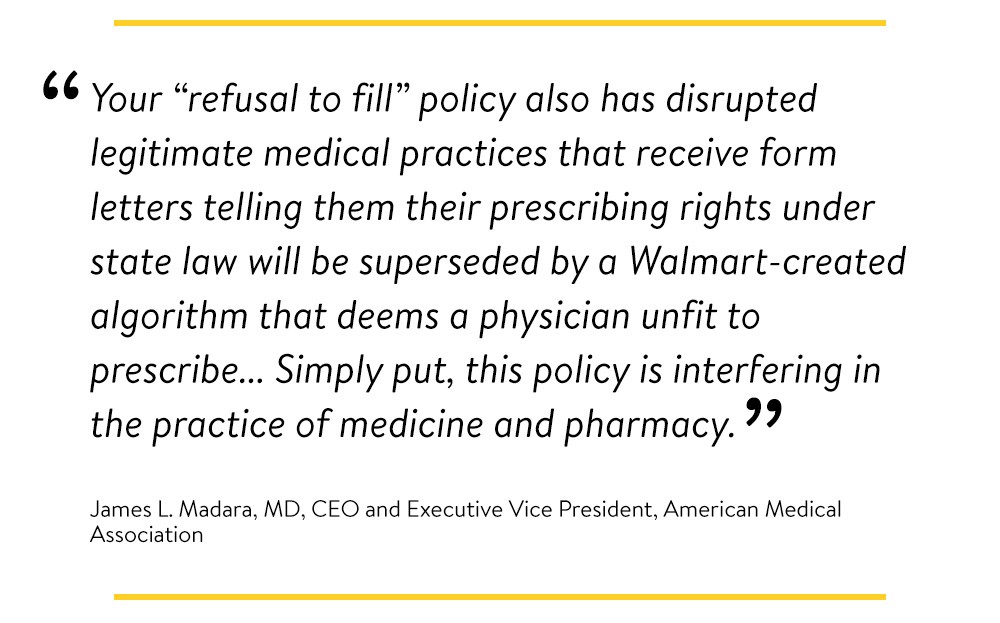 So the AMA has accused the company of creating a physician “blacklist.” 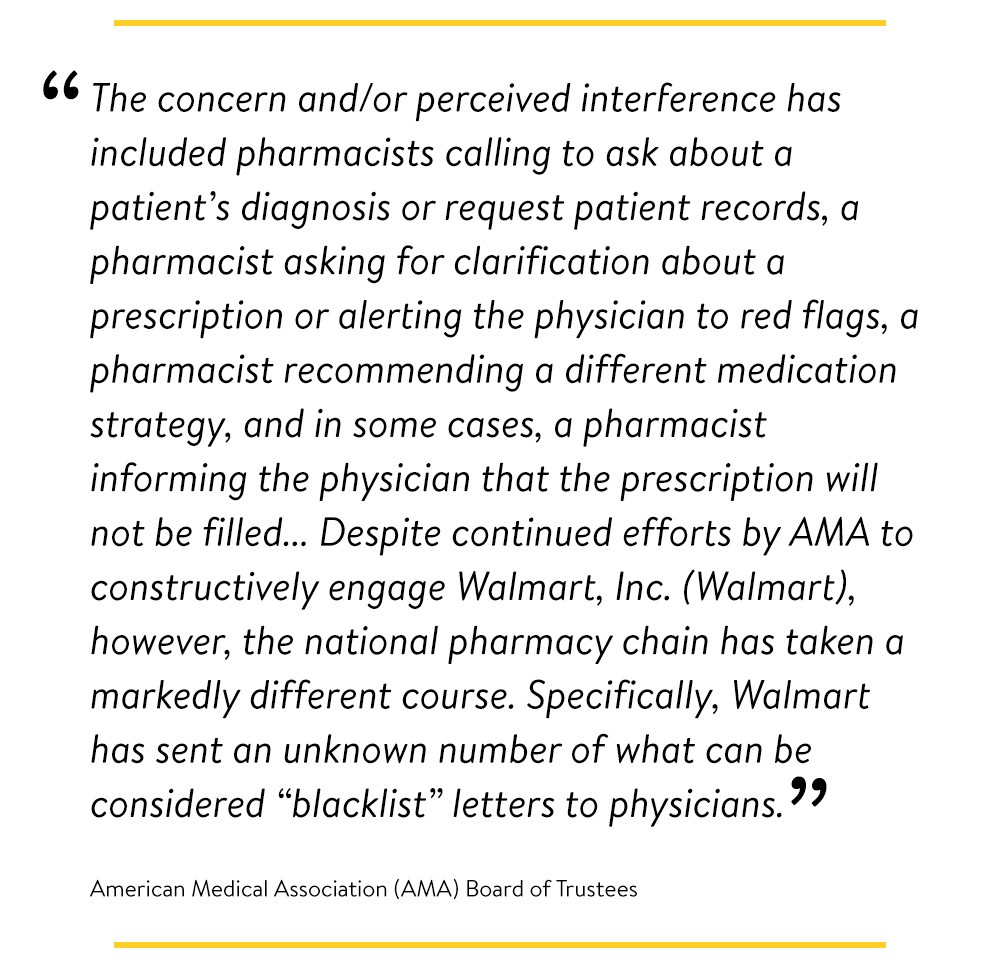 Many doctors have south pharmacists and pharmacies—including Walmart—for blocking their prescriptions, saying they have tarnished their professional reputations. And recently, a doctor in Nevada sued Walmart and other pharmacies saying they acted improperly in “issu[ing] blanket edicts refusing to fill narcotic prescriptions from certain medical providers.” In a similar lawsuit, a federal judge Recently ordered one pharmacy to fill prescriptions for a doctor that the pharmacy had blocked.

There are many other examples, but you get the picture: plaintiffs’ legal theories are trying to put pharmacists and pharmacies between a rock and a hard place by demanding they go further in second-guessing doctors, while state health regulators say they are going too far. Ultimately, patients are caught in the middle.

A Better Path: Clarity for Doctors, Patients and Pharmacists

Walmart is proud of our pharmacists, and we intend to defend against these meritless lawsuits. We also need a real solution to the rock-and-a-hard-place problem. In working toward the best policy answer for this problem, each branch of government has a role to play in providing clarity for doctors, patients and pharmacists on how to handle opioid prescriptions.

For starters, DOJ and DEA could go through the proper rulemaking channels to clarify going forward what the agencies expect of pharmacies and pharmacists, rather than make them guess what DEA wants by looking at DEA’s scattered letters and PowerPoints (that have no legal authority, anyway ). In fact, Walmart has filed apetitionDEA to propose a rule-making asking to provide this much needed clarity.

And according to theDepartment’s own Inspector General, DEA needs to do a better job using the tools and legal authority Congress gave it to keep bad doctors from prescribing opioids. Right now, the plaintiffs’ lawsuits are trying to turn pharmacists and pharmacies into the prescriber police—even though they lack DEA’s authority and tools to do their job, and states say that they can’t under state law.

Legislatures—state and federal—also have an important role. That’s why Walmart has been pressing for much-needed legislative reforms to help fix the opioid crisis. For example, legislatures could help protect pharmacists when they properly refuse to fill prescriptions, so they do not face retaliatory investigations and lawsuits—protections we have asked for in Georgia, for example.

And the courts need to clarify what existing law says. That is why in 2020, Walmart proactively brought its ownlawsuit, asking a court for clarification on what the law says pharmacists and pharmacies should do when a patient presents an opioid prescription that looks legitimate. Walmart also sent the DEA a formal legal request that it live up to its legal responsibility and provide guidance to the pharmacy industry.

Our nation’s doctors, pharmacists and patients deserve better than the current bramble patch of inconsistent, conflicting and outright contradictory guidelines from federal and state regulators. And, we shouldn’t trust that plaintiffs’ lawyers, with their own motivations, will lead us to a solution that is good for health care. Let’s work together to fix this.

Opinion | We have a way to end the opioid epidemic, but not the will