Harm reduction advocates want the province of Manitoba to declare a public health emergency to address what they say is a drug-poisoning crisis.

“The overdose crisis is spiraling out of control while our city and our province pursue a failed law enforcement approach to a public health emergency,” said Thomas Linner of the Manitoba Health Coalition, a non-profit organization dedicated to the expansion of public health care .

Last year, 407 Manitobans died from illicit drug overdoses, according to data from the province’s chief medical examiner — more than double the historical average of 200.

Linner and other community groups gathered on the steps of the Manitoba Legislature Monday morning, calling on the premier to open supervised consumption sites and establish a safe and regulated drug supply for known drug users, in order to help reduce overdose deaths.

Linner said the province’s approach so far has been “uniquely hostile” to harm reduction efforts. He expects the number of drug-related deaths to grow if provincial leaders don’t change course.

Thomas Linner of the Manitoba Health Coalition, along with other harm reduction advocates, called on the province Monday to declare a public health emergency to address an increase in overdose deaths. (City News)

In May, the provincial justice minister said he’s not interested in asking Ottawa to exempt Manitobans from federal criminal charges for possessing small amounts of some drugs, after the federal government agreed to such a plan in British Columbia.

Manitoba’s provincial government has also been cool to the idea of ​​supervised consumption sites.

In a 2021 year-end interview, Premier Heather Stefanson questioned the efficacy of those sites, which can offer people with addictions a place to obtain clean needles, have street drugs checked for the presence of harmful chemicals, get tested for communicable diseases, and receive emergency medical treatment and basic medical care.

When asked again Monday if she would be open to safe consumption sites — and if she would declare a public health emergency or consider facilitating a safe supply of drugs — Stefanson did not directly respond to those questions.

“People are suffering from mental health and addiction problems that have been exacerbated … from the COVID-19 pandemic, so certainly our thoughts and prayers are with the families,” the premier said.

She instead pointed to the province’s rapid access to addictions medicine, or RAAM, clinics, which she said the province supports “to make sure that we get those individuals off of the addictions and can heal in the community as well.”

“So those are the types of supports that we’re investing in — they have proven track records, very good ones, and we’ll continue to make those investments.”

In a statement, a provincial spokesperson said the government is committed to increasing access to supports to overcome addictions, pointing to ongoing support for a sixth RAAM clinic in Portage la Prairie, which opened in 2020, and more than $800,000 announced last year to boost capacity at two Winnipeg RAAM clinics.

Declaring a public health emergency would allow resources and public health officials to be directed to address the issue quickly, he said.

The groups behind Monday’s call to the province — which also included the Manitoba Harm Reduction Network, Klinic Community Health and Moms Stop the Harm — want to see Manitoba work with the federal government to decriminalize small amounts of drugs, like BC is set to do starting next year.

The issue should be moved from Goertzen’s portfolio to that of Mental Health and Community Wellness Minister Sarah Guillemard, the groups say, arguing it’s one of health rather than justice.

Arlene Last-Kolb, the regional director of Moms Stop the Harm, has advocated for addictions issues since she lost her son to a drug overdose in 2014. She says parents like her have waited far too long for help from the government. 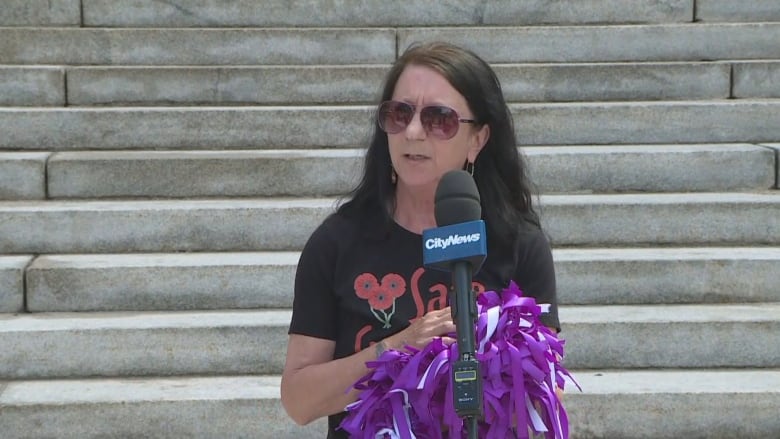 Arlene Last-Kolb lost her son to an overdose in 2014. She says a harm reduction approach to addictions will save lives. (City News)

“I support harm reduction — it is what will save lives. We want a safer supply because it’s better than the option out there,” said Last-Kolb.

“We know that in safe consumption sites people overdose, but they don’t die. But we know that people die here every day, alone in their homes.”

People with addictions don’t belong in jail, she said.

“If you are dead from a poisonous drug supply you will not make it to treatment.”

The groups also want the government to pass a private member’s bill that would require the province’s medical examiner to better track overdose deaths and report them publicly.

The City of Winnipeg has shown some support for the idea of ​​supervised consumption sites, but Coun. Sherri Rollins says the city needs cooperation from the province.

“Without serious and immediate action from the provincial government we are at risk of losing any progress that has been made,” the Fort Rouge-East Fort Garry councilor said Monday.

“We need a willing partner at the table.”