Russian President Vladimir Putin’s war in Ukraine has jolted Europe’s slow-moving efforts to wean itself off Russian natural gas, but time is running out, threatening to leave consumers cold and factories idle by next winter.

Whether the Kremlin turns off the taps in retaliation for sanctions or Europe stops buying, European policy makers agree that they need to prepare for a future with much less Russian energy, if any.

Untethering Europe’s gas market from Russia would represent a monumental change for a continent that has grown so reliant on gas from the Siberian permafrost that it has built little infrastructure needed for alternative supplies.

The European Union gets around 40% of its gas from Russia—and that dependence has grown in recent years. This week, as the West sought to hobble Russia with sanctions, the EU was paying as much as 660 million euros—roughly $722 million—a day to Russia, according to the Bruegel think tank. That is triple the level before Russia invaded Ukraine.

“It has become painfully clear that we cannot afford to leave to any third country the power to destabilize our energy markets or influence our energy choices,” Kadri Simson, the EU’s energy commissioner, told the European Parliament on Thursday.

Replacing Russian gas is easier said than done, however. Many liquefied natural gas terminals that receive deliveries from the US and Qatar are maxed out. Two new terminals approved by the German government this week will only be built in three years at the earliest, one of the companies involved has said.

An LNG tanker in the port of Barcelona, ​​Spain. LNG terminals in Spain are only 45% utilized but analysts say pipelines over the Pyrenees can’t transport more and are difficult to expand.

Renewables would take even longer to make a difference, analysts say. Suppliers closer to home—such as Norway, Algeria and Azerbaijan—are unable to significantly scale up production. Internal linkages between Europe’s gas pipeline networks are patchy, making it difficult to distribute whatever extra gas there is.

Any new LNG cargoes will come with a much higher price tag than piped Russian gas, threatening a European economy already struggling with inflation. Filling up enough gas in European storage ahead of next winter would cost at least 70 billion euros at current prices, compared with 12 billion euros in previous years, Bruegel says.

“We would have to ask people to turn down the thermostat at home and we will have to ask industries to close down for a certain period of time,” said Simone Tagliapietra, a senior fellow at Bruegel.

In an extreme scenario, analysts say this might lead to chemical plants, smelters and other heavy gas users temporarily shutting down. In practice, that could be achieved via governments paying companies to limit natural gas and electricity consumption to a certain level via tenders, analysts said. Both gas and electricity would need to be rationed, potentially leading to blackouts and heating disruptions.

“Europe thought that energy security was something from the past, it was not a real risk anymore,” Mr. Tagliapietra said. “We just sat and did business as usual.” 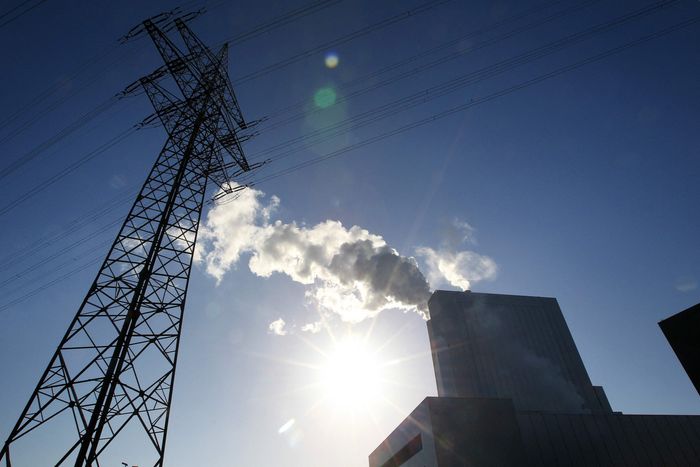 A coal-fired power plant in Germany. A pivot toward coal would imperil climate-change policies.

Europe’s reliance on Russia varies. Countries such as Germany, Italy and a clutch of Central and Eastern European nations are poised to be hit the hardest as they rely more on Russian imports. The UK, Portugal and Spain, on the other hand, don’t consume much Russian gas—but even they would feel the sting from higher prices. European gas prices broke records this week as traders priced in the impact of possible disruptions.

“If the Russian gas stops, there will be no ceiling for prices,” said Martin Vladimirov, director of the energy and climate program at the Sofia, Bulgaria-based think tank Center for the Study of Democracy.

Research outlet Capital Economics is lowering its forecast for eurozone economic growth this year by around 1 percentage point on the back of sanctions. It said that an end to Russian gas deliveries could reduce growth by a further 2 percentage points and trigger a recession.

Officials and analysts agree that the consequences of a full stoppage now would be surmountable this winter and spring. Many thermal power plants that use gas could switch to fuel oil within a week or so, analysts say, with only temporary cuts in heating supply. Industries might need to curtail some of their activities. Record non-Russian imports wouldn’t be enough to sufficiently refill storage ahead of the next cold period, Bruegel said, and Europe would need to reduce gas demand.

Even if European officials secure new supplies, getting them to the right place is another challenge. Much of Europe’s re-gasification capacity, used to turn LNG back into gas, sits on its western coasts in Spain, France and the UK but the pipeline systems to Germany and the eastern flank aren’t well linked to these places. LNG terminals in Spain are only 45% utilized but pipelines over the Pyrenees can’t transport more and are difficult to expand, analysts say.

In the east, neighbors Bulgaria and Greece have been working on an interconnector for years that would enable Bulgaria, which gets around 75% of its gas from Russia, to tap into a Greek LNG terminal. It has yet to begin operation.

Meanwhile, a switch to coal, besides imperiling climate-change policies, is equally vulnerable to the crisis. In 2020, the EU got 49% of its hard coal imports from Russia.

“Over the next 12 months, there is little that can be done to remove hard physical bottlenecks,” Bruegel said. The crisis scenario “will require improvisation and entrepreneurial spirit.”

Long resistant to diversifying supplies away from cheap and plentiful Russian gas, Germany on Wednesday commissioned its gas market trading hub to buy LNG for 1.5 billion euros from outside Russia. On Monday, Italy’s minister of foreign affairs and the chief executive of energy major Eni SpA shuttled to Algeria to negotiate new deliveries. Austrian officials have been meeting with leaders from Gulf states in recent weeks.

How do you think the war in Ukraine will change the way Europe uses energy? Join the conversation below.

At the EU level, officials are working on rules to force operators to keep reserves at a certain level and expand renewable energy in the long run.

With LNG terminals taking years to build, another option policy makers have is to rent or buy so-called floating LNG facilities which usually come in the form of large ships.

Costing less than half of building a traditional on-land terminal and up and running in months, the vessels anchor at ports and distribute gas into land-based pipeline networks. Lithuania managed to reduce its dependence on Russia when it opened such a terminal in 2014. It is unclear if European officials are currently pursuing that step but analysts say there are nearly a dozen such facilities available on the market.

In theory, fracking is another option in Europe, although it has faced considerable opposition due to environmental concerns. Germany banned fracking in 2016 for fear the chemicals in the process could contaminate water supplies, but has some natural reserves it could tap if it were to change its legislation—not one of the options Berlin has said it is exploring.

Write to Georgi Kantchev at georgi.kantchev@wsj.com