Discarded syringes scattered on the street, addicts sitting on the curb injecting needles into their veins. These are the daily sights of Madlyn Stokely and her fellow community volunteers encountered when taking a stroll through Harlem, one of the most densely populated Black communities in New York City (NYC).

Drug overdoses, particularly as a result of opioids, unfold a growing and devastating crisis in the United States. To combat the epidemic, the US Department of Health and Human Services declared a “public health emergency” back in 2017. Yet in 2021, an estimated 107,622 Americans died from a drug overdose – one death every five minutes – a record high, according to data from the Centers for Disease Control and Prevention (CDC). Among them, 71,238 died from synthetic opioids, also known as fentanyl. 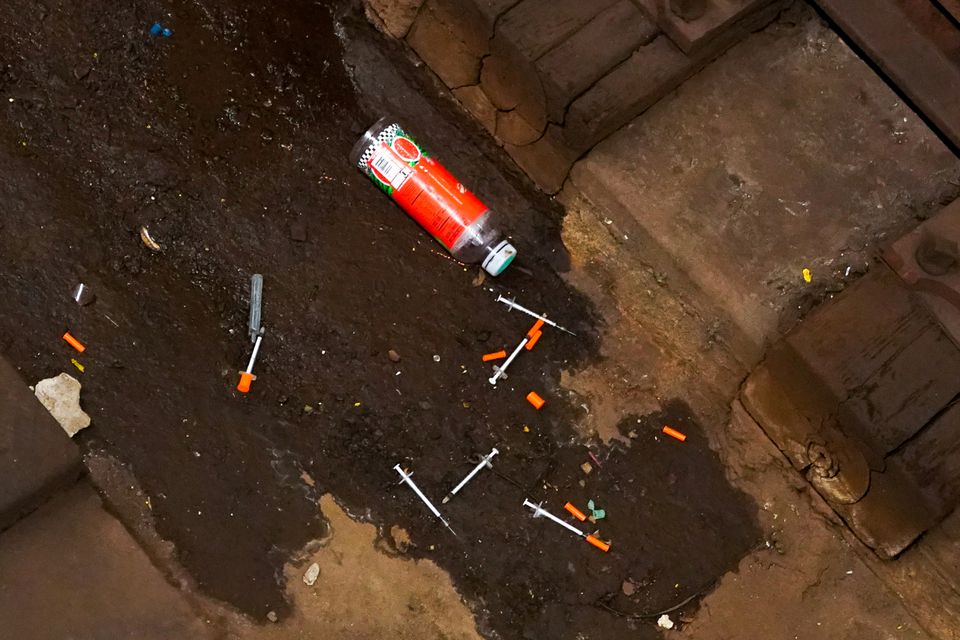 Discarded syringes are seen at a subway station train tracks in the Washington Heights section of New York City, US, November 30, 2021. /Reuters

Discarded syringes are seen at a subway station train tracks in the Washington Heights section of New York City, US, November 30, 2021. /Reuters

In NYC, statistics show that communities of color such as Harlem have been hit the hardest by the opioid crisis. Among all ethnic groups, Black New Yorkers had the highest rate of overdose death in 2020 – 38.2 deaths per 100,000 residents – and the largest increase from 2019 to 2020 of 14.2 per 100,000, according to the NYC Department of Health and Mental Hygiene. Harlem had the fourth highest rate of drug overdose deaths from opioids in the city. With 41.5 deaths per 100,000 residents, it significantly exceeded the city’s average of 25.9 per 100,000.

Stokely, a lifelong Harlem resident now in her 70s, said the neighborhood had been plagued by drug activities for as long as she could remember, but she had never seen people “shooting up on the street” until recently. She said a few blocks in the neighborhoods in particular are “inundated” with drug users nowadays.

“And then also feeling your own lack of safety (from) just the visual seeing someone who just looks like they really should be in a hospital or maybe intensive care, and you are seeing that all day, every day. It’s just really sad and depressing,” Stokely, who is the president of a non-profit neighborhood organization called the Mount Morris Park Community Improvement Association (MMPCIA), told CGTN.

There are many reasons behind this tragedy, but Stokely identifies one in particular. She argues it’s related to the increase in drug treatment clinics in Harlem, which she says far exceeds the proportionate level for the number of addicts in the neighborhood, thus leading to addicts from elsewhere flooding in.

With a common goal to unburden Harlem of over-saturated opioid treatment programs, Stokely’s MMPCIA and 109 other community organizations in the area came together and are now part of the Greater Harlem Coalition (GHC).

In August 2020, the GHC submitted a request for data from New York State’s Office of Addiction Services and Supports (OASAS), and learned that although 6.9 percent of those attending NYC’s OASAS-approved opioid treatment programs live in Harlem, over 19 percent of all such programs are located in the neighborhood.

Shawn Hill, a co-founder of the GHC, said only one in four people who attend methadone clinics and opioid treatment programs in the greater Harlem area live in the local community. The other 75 percent come from elsewhere in the city. The lack of local programs in neighborhoods with a larger white population and the over-saturation in a colored community like Harlem, Hill believes, is due to systemic racism, and is a legacy of the redlining policy that still lingers today.

Redlining was a discriminatory housing policy from the 1930s through to the late 1960s. The policy ruled that people from neighborhoods deemed “hazardous” – most of them having a high ethnic minority population – were denied loans, insurance and other services. In 1938, Home Owners’ Loan Corporation (HOLC) drew a “residential security map” of NYC, classifying the city’s residential districts into four grades: green for “best,” blue for “still desirable,” yellow for “definitely declining” and red for “hazardous.” Harlem was among the red areas. 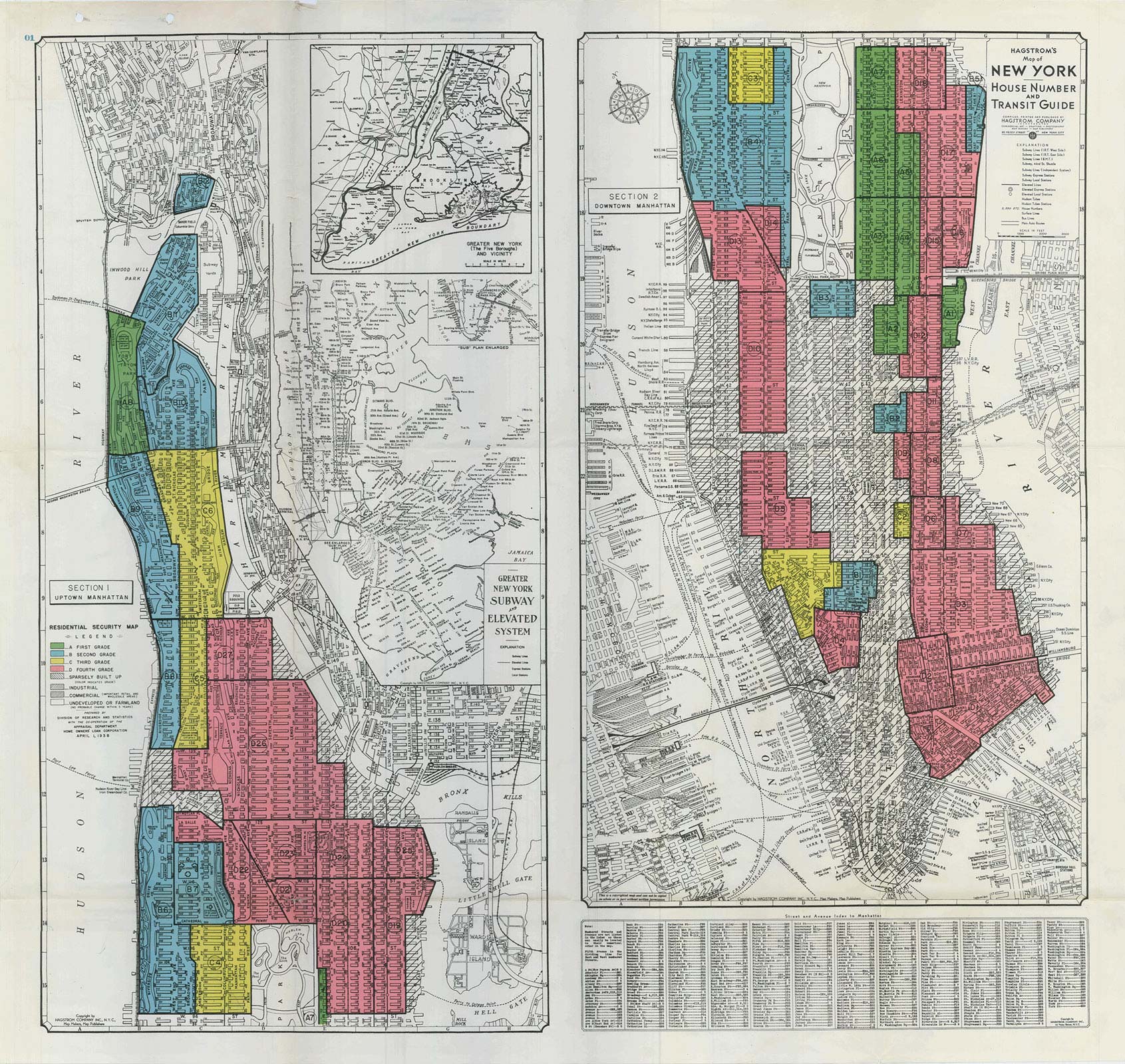 Is ‘harm reduction’ the answer?

With the goal of stemming the spike in overdose deaths, on November 30, 2021, NYC opened the first two sites in the US to allow supervised narcotics injection. Addicts come in with their own drugs and are provided clean needles for injection. One of the sites is in East Harlem.

The decision aligned with the Biden-Harris administration’s drug policies, which place “harm reduction” as a priority. On April 21 this year, the White House released the National Drug Control Strategy, which called for the enhancement of harm reduction interventions, along with other measures such as disrupting illicit drug supply chains, strengthening interdiction and law enforcement capabilities on borders. 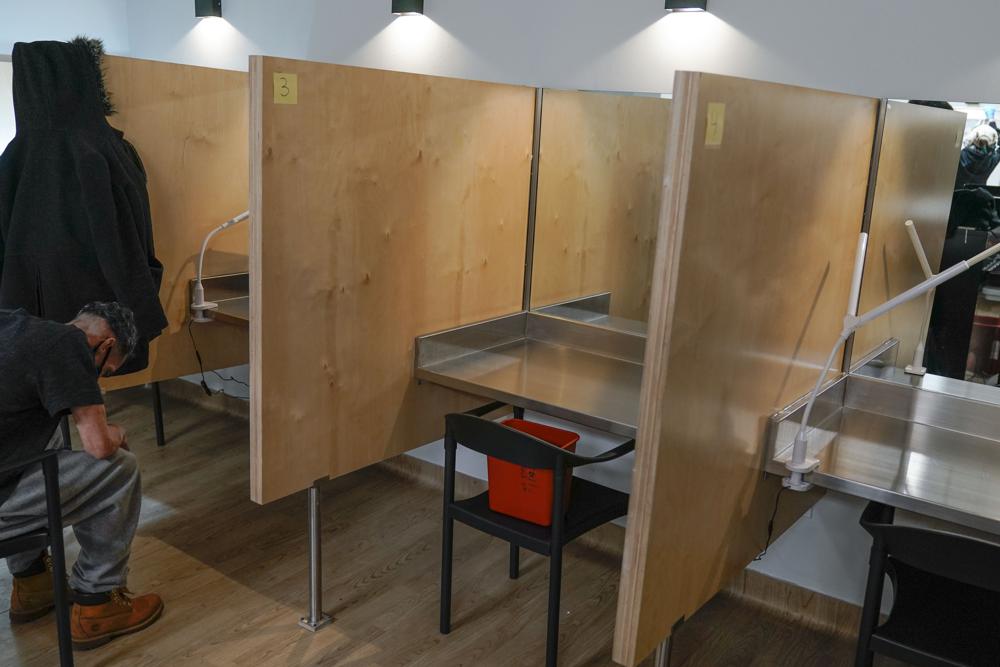 A client sits in one of the semi-private cubicles used by people with drug addiction at an overdose prevention center, OnPoint NYC in New York, January 18, 2022. /AP

A client sits in one of the semi-private cubicles used by people with drug addiction at an overdose prevention center, OnPoint NYC in New York, January 18, 2022. /AP

But the crisis has not faded away, and the new sites have brought fresh problems to the local community. Discarded syringes were seen strewn across the sidewalk near one of the injection sites. Harlem residents were furious, and organized a protest in December 2021 to demand a reduction in the density of substance use programs in the area, and a healthy environment for their children.

“I feel like every borough should have a clinic, and whoever is in the borough that needs the clinic, they go there, instead of pushing everyone into one area,” a Harlem resident named Chanel Edwards told CGTN.

Mike Vigil, former chief of international operations for the US Drug Enforcement Administration, said that although strengthening interdiction at the border works to an extent, it won’t eradicate the root cause of the drug crisis – high domestic demand.

As long as the demand persists, Vigil said, the drugs will always flow in from a supplier somewhere in the world no matter the interdiction strength, and “if it’s not Mexico or Colombia, it’s going to be another country.” Instead, Vigil believes that treatment and youth education are critical areas that need to be improved, as the current treatment programs in the country are not effective enough.

“What they do is they detox the individuals and then they go back to the same neighborhoods, a lot of time there’s not any follow-up, so they’re back on drugs within a couple of weeks,” Vigil told CGTN’s “The Heat “.

Stokely made a similar point. Instead of building more and bigger clinics, the key for the government is to learn why people end up getting addicted in the first place, she said, and then, “how we, as a society, can help to support those who want to have a different lifestyle.”

Funds from $300M opioid settlement to arrive in Minnesota counties, cities this summer

Commission meeting on how Kentucky will spend drug settlement money