If the US aspires to climate leadership, it must break its addiction to the products driving forest destruction (commentary)

The world is waking up to the climate crisis. But time is short. It is a problem, then, that populations of rich countries responsible for this looming disaster are kept ignorant of the real extent to which their own actions drive it. The long and complex supply chains of globalization mean the impacts of our consumption are hidden from us.

Our impact on forests is a case in point. As my organization’s investigations have repeatedly proved, precious tropical forests are bulldozed, indigenous people abused, and environmental defenders murdered to supply our everyday goods. If US shoppers could see what they are complicit in, they would want these products taken off the shelves.

We now have an opportunity to do exactly that. A law currently before Congress – the US FOREST Act – would ban the import of agricultural goods like soy and beef produced overseas on land illegally cleared of forest.

Up to 90% of forests cut and burned in the Brazilian Amazon are cleared illegally for such commodities. This isn’t subsistence farming but big business; much of it is export-driven. Laws like the US FOREST Act could help halt this destruction by choking off a big chunk of the cash funding it.

Such laws must be passed urgently. To be effective, however, they must also be well designed and properly implemented and enforced. Lessons need to be learned from past failings. The US banned imports of illegally cut wood 14 years ago. However, as our latest report, The Fixers, dramatically demonstrates, suspect wood continues to flow in.

Using leaked documents, court filings and interviews with prosecutors, Earthsight and Mongabay revealed a catalog of wrongdoing by one of Brazil’s biggest tropical wood product exporters. Bribery of officials. Links to the largest illegal timber bust in Brazilian history. Laundering of wood worth millions. Handling illegal wood from a precious indigenous reserve.

Despite many of these scandals already being in the public domain, and the US’s feted ban on illegal wood, over the last five years, the Brazilian firm involved has been able to ship flooring to the US with a retail value of almost a quarter of a billion dollars. Its products are on sale across the US, including at branches of home improvement giant Menards.

The US ban on illegal timber has failed for several reasons, chiefly a failure to acknowledge the reality of importing from a place like Brazil, where the illegality of goods can be hard to prove and is abetted by even high-ranking government officials.

In the European Union, legislators have reversed the burden of proof, demanding importers trace such products to the source and demonstrate they are legit. This same standard must be applied to laws relating to US imports of ‘forest risk commodities,’ including timber.

In 2021 the Biden administration unveiled its ‘Plan to Conserve Global Forests’ with laudable goals, but these efforts will fail if they do not acknowledge the truth about what causes deforestation: the unfettered power of timber and agribusiness and the corruption and governance failures it causes . Calls on forest countries to do more will fall on deaf ears so long as the US continues to profit from the destruction. After all, no one listens to a hypocrite. 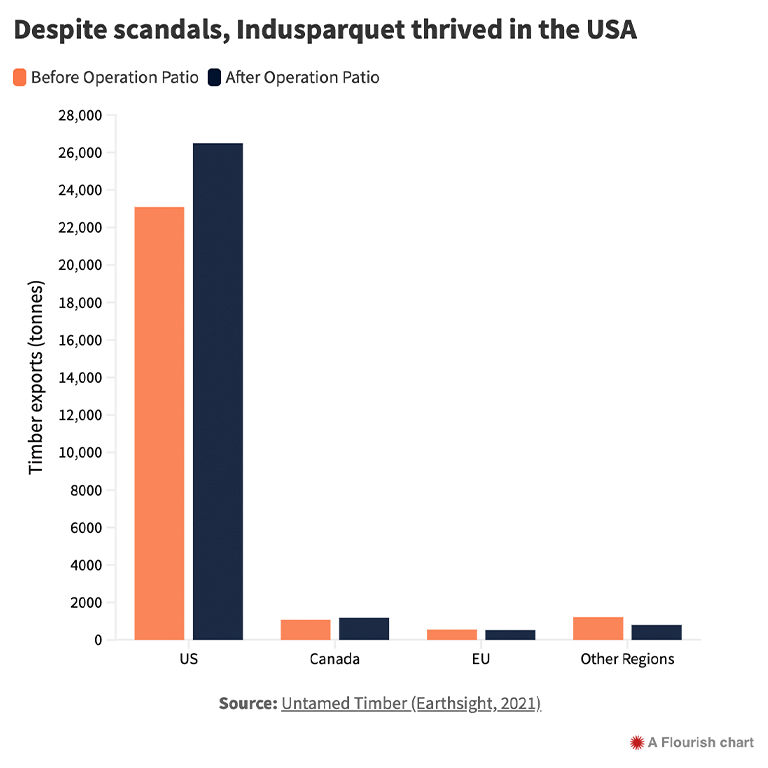 Timber export to US. Image by Earthsight

Sam Lawson is the director of Earthsight.

Opinion | This Is the Reality of America’s Fast Fashion Addiction