SHREVEPORT – Staff at the Philadelphia Center, an HIV resource center, donate their Friday mornings sifting through boxes of needles, condoms and lube. While the smaller needles tend to go faster, the center stocks all varieties for methamphetamine users who need clean supplies.

“It’s not just about syringes for us,” Hershey Krippendorf, the center’s development director said. “It’s about being a place that our participants can come and feel like they’re being heard and taken care of. It’s just to show up for a particular population that has just been thrown to the side.”

The center’s Syringe Service Program is a project the center started in January 2020. It had an estimated 500 participants, around 90% of whom are meth users. The program relies on word of mouth to build trust among addicts.

Meth is a widespread but little-publicized problem in the Shreveport area. Outside of medical records and drug arrest records, meth users are not documented and addiction is not limited by demographics.

Estimating the actual numbers of meth users in Northwest Louisiana is extremely difficult, according to Susan Reeks, director of marketing and development for the Council on Alcoholism and Drug Abuse (CADA) of Northwest Louisiana.

“As far as just the numbers of how much meth is being used, I don’t know how anybody can give you a real good number on that. We just know that it’s a big problem,” Reeks said.

The CADA of Northwest Louisiana, which provides addiction treatment services, said the majority of their clients were people struggling with either meth addiction or alcoholism.

“It’s not just people on the streets or people in high school that get a hold of it, a couple of lifetime users,” Reeks said. “There are actually successful, respected people in the community that take meth to lose weight. Others take it so they can have enough energy to do everything they need to do, couples take it so they can check into a hotel room all weekend and never sleep. I mean nobody ever thinks they’re going to get addicted.”

Hershey Krippendorf, director of development at the Philadelphia Center, is photographed Aug. 26, 2022, at the center in Shreveport. (Photo by Henrietta Wildsmith)

For those who have gotten addicted, the Philadelphia Center is there.

Each Friday participants pick up their supplies, which include wound care kits, fentanyl testing strips and other items. The program also provides safe syringe disposal and testing for HIV and hepatitis C.

Instead of pressing participants to quit using, Krippendorf emphasized that the program’s mission is to provide safer experiences for them.

“You’re meeting people where they’re at, and we wouldn’t be here if it wasn’t for them. So it’s important to make sure that their voices are heard and to hear what their needs are,” Krippendorf said.

The participants’ struggles in the program are familiar to Krippendorf, who was a meth user for about eight years. When she got pregnant with her daughter, she said she knew she had to stop but struggled to find resources to quit.

“It was either you go to recovery or that’s it,” Krippendorf said. “People don’t realize that it is super, super tough to come off it, especially with heavy drug use, years and years. Your body goes into shock because you have built up a tolerance… and your body has become so dependent.”

The number of overdose deaths involving psychostimulants other than cocaine rose from 5,526 to 15,489 between 2015 to 2019, according to a study by the National Institute on Drug Abuse. Researchers attributed a majority of these deaths to methamphetamine use.

In March of this year, President Joe Biden signed the Methamphetamine Response Act, calling for the increase in addiction to an “emergency drug threat.”

Sitting in her office, she pointed to a succulent on the window sill. The woman who gave it to her was a meth addict and former program participant. After getting out of jail, she took too large a dose and her heart stopped.

“She was on a path to abstinence and then just fell off,” Krippendorf said. “Things like that, it’s tough. You get close to them.” 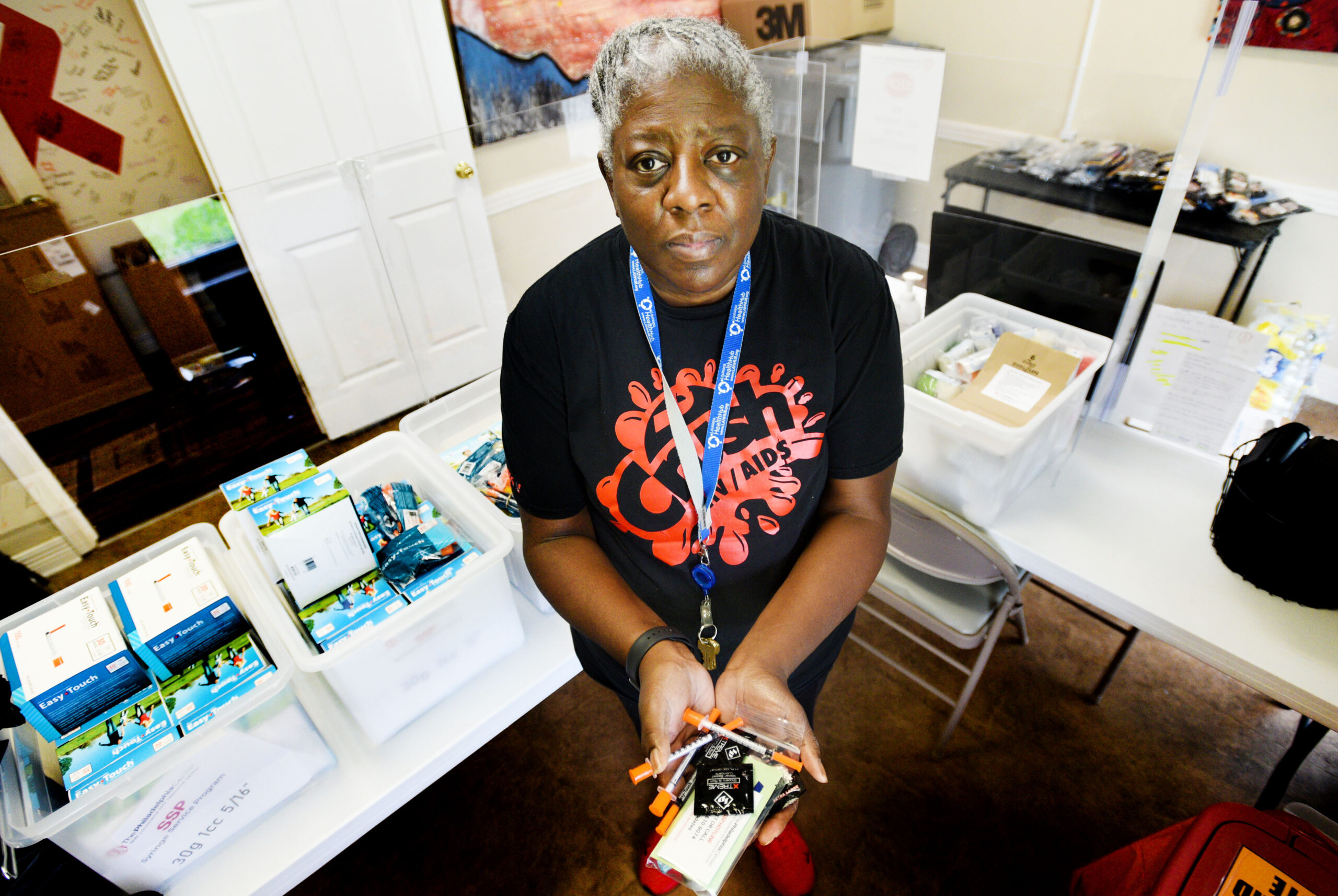 Virginia Player holds out some of the items that she gives to people at The Philadelphia Center in Shreveport on Aug. 26, 2022. (Photo by Henrietta Wildsmith)

A few miles away at LSU Health Shreveport, pharmacologist Dr. Nicholas Goeders is also working on the meth crisis in Shreveport. As chair of the pharmacology, toxicology and neuroscience department, his career has focused on the problem of addiction. He’s also executive director of the Louisiana Addiction Research Center at the medical school.

Goeders began studying meth in 2007 when he got a call from a Texarkana, Texas nurse alerting him about growing methamphetamine addiction rates in the area. After interviewing Shreveport meth users at treatment centers, prisons and other community sites, he focused on treating people who wanted to stop using but didn’t know how.

“Even if someone gets through rehab and they get out and they pass by a house, maybe where they used before, or they see someone, something will trigger that memory of meth,” Goeders said. “We know opioids are a problem. We have recognized that for several years, but methamphetamine is a growing problem and more needs to be done. Opioids really aren’t big here in the Shreveport area. It’s almost all methamphetamine.”

Goeders is placing his hopes in a new compound developed in his lab, EMB-001, pioneered by Embera Neurotherapeutics, the Shreveport-based biopharmaceutical company he co-founded. He believes the compound could work on many different types of addiction.

“It blocks the effects of those triggers that stimulate this response in the brain that leads to craving which then leads to relapse,” Goeders said.

EMB-001, a combination of two Food and Drug Administration-approved medications, is in phase two of clinical trials with results likely to come out in early 2023. Goeders expects it to be released to the public after FDA testing is complete. A timeline for EMB-001 hitting the market is uncertain, he said.

“We’ve seen people suffer, and they shouldn’t have to suffer,” Goeders said.

How much does drug addiction cost San Francisco? One supervisor wants to find out