In view of the threat of power outages, Indonesia’s energy crisis underscores its dependence on coal

JAKARTA – An abrupt ban on coal exports by the Indonesian government for the whole of January for fear of domestic supply shortages should be a wake-up call to accelerate the country’s transition from fossil fuels, experts say.

When the ban was announced on January 1, the Ministry of Energy and Natural Resources said it was a necessary step to prevent blackouts for 10 million households.

“If the export ban is not imposed, there will be almost 20 coal-fired power plants [total] it will assume a capacity of 10,850 megawatts, ”said Ridwan Jamaludin, the general director of the Ministry of Coal, as quoted by local media.

Under the “Domestic Market Obligation” (DMO), which has been in force since 2009, miners have to sell 25% of their production on the domestic market. A large part of this is intended for the state electricity supplier PLN, which sells coal at a maximum price, which is currently less than half the world market price.

Because higher profits can be made from exporting coal, many miners have not reached their DMO and are leaving the PLN network of coal-fired power plants on January 1st with less than 1% of the fuel they need that month.

“That amount is not enough to meet the needs of every coal-fired power plant,” said Ridwan. “If strategic measures are not taken immediately, there will be widespread power outages.”

“Crisis under its own steam”

While the ban has an immediate impact on stockpiling, the energy minister said, policy experts say the crisis shows the need to wean Indonesia off its coal dependency and towards renewable energy sources.

“We caused this crisis ourselves, not because we lack potential energy sources, but because our policies keep driving us to continuously burn coal so that our inventories are running low,” Mahawira Singh Dillon, senior policy researcher at the clean energy nonprofit Yayasan Indonesia Cerah said during a discussion on Twitter recently.

He said the government had been enacting guidelines for years that favor mining companies rather than renewable energy investors. For example, coal-fired power plants are heavily subsidized.

In 2020, despite widespread criticism, the legislature passed a controversial mining law. Critics say the law undermines environmental protection for the benefit of mining companies, including by granting larger concessions and longer contracts while reducing their environmental obligations. This practically ensures the continued existence of seven large coal mines, whose contracts would otherwise have expired between 2020 and 2025.

Even the DMO policy was a concession to the coal companies, but it has now backfired, Mahawira said. The companies had campaigned with the government for DMO to have a guaranteed buyer in PLN at a time when coal exports were grossing around $ 55 a ton. Since the DMO was capped at $ 70 per ton, it meant they received a premium from PLN.

Then the market turned. Last October, global coal prices soared to a record high of $ 270 per tonne; today they’re around $ 152 per tonne as coal demand hits a record in 2021 and supply remains tight.

“She [miners] I didn’t expect global coal prices to exceed $ 200 per ton, ”Mahawira said. “So you’re naughty now [and exporting their coal instead]. “

The Indonesian Coal Mines Association (ICMA) called on the government to lift the ban, saying the policy will harm the mining industry and cost the country $ 3 billion in lost coal export revenues. 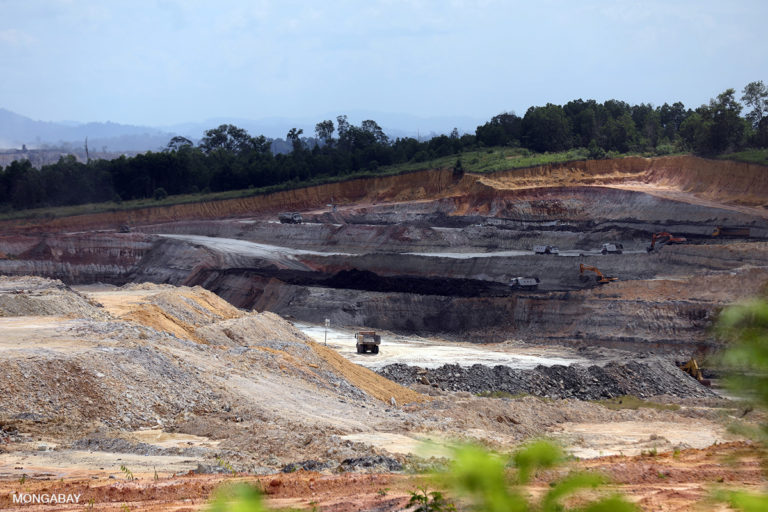 Coal mine in Indonesia. Photo credit: Rhett A. Butler

This is not the first time Indonesia has faced an energy crisis as coal miners prefer to export their products rather than sell their products domestically. According to Sarah Agustio, a researcher at Trend Asia, an NGO focused on the clean energy transition, Indonesia has experienced major bottlenecks four times in the last 15 years: 2007, 2008, 2018 and mid-2021.

In July 2021, PLN’s power plants had less than 10 days of coal. This prompted the government in August to impose a coal export ban on 34 companies.

As long as Indonesia continues to rely on coal to power the country, it will continue to face more episodes of energy shortages, Sarah said.

“The export ban shows that Indonesia has not learned from the experience of the past 15 years,” she said. “This is a sign that we have to switch to renewable energies.”

“The switch to renewable energies is not to be taken seriously,” said Sarah, “although we know that we have many renewable sources such as wind and water.”

In order to reduce the export incentive for miners, experts have asked the government to lift the price cap under the DMO.

“The DMO [price] should be made dynamic, below the international price, but not fixed, ”said Fabby Tumiwa, executive director of the Institute for Essential Services Reform (IESR) policy think tank.

This will inevitably lead to a spike in electricity prices, but that’s not necessarily a bad thing if the end result for the country is a shift from fossil fuels to renewable energies, he said.

The only reason for the increase is that current prices are being kept artificially low by heavy subsidies. If PLN were forced to buy coal at market prices, the electricity it produces would be less competitive than that produced from renewable sources, Fabby said.

By lifting the DMO price cap, the price of coal-based electricity would reflect the true cost of the country’s reliance on coal burning, he added.

“If prices are raised, PLN will be forced to use renewable energy,” he said.