The opioid epidemic is driven by more than the sale of illicit drugs, increased opioid prescribing and the pandemic.

Stigma fills the lives of many people living with opioid addiction, exacerbating hopelessness, loss of dignity and shame. There is a broad misconception that opioid dependence is a personal moral failing, but many people misuse opioids to manage pain.

Individual failure is not the driver of opioid addiction. It is a complex and intertwined set of root causes including poverty, social isolation, disability and physical and psychological trauma.

I am the lead researcher of an ethics-approved study investigating the practice of making video games to support addiction recovery. We hope that our work will help fight the stigma of opioid addiction and give support to those struggling.

Aspects of the study

The study will give adults living with, or who have a history of opioid addiction, the tools and resources to tell their story, learn about themselves, build community and raise awareness about addiction-related stigma, while also acquiring valuable computer skills.

We will do this by bringing people together to connect in a physical space and make video games informed by their stories. We will mentor and teach them about how to make their first game prototype. This includes learning how to tell their story through a video game, create the art and animation, program the game and playtest it.

Telling a life story is a profound self-learning exercise because it requires the storyteller to explain and clarify their decision-making processes in life. Rendering a life story through a digital game requires the game maker to tell it computationally, through digital code, which also compels them to think creatively and logically.

We plan on conducting a series of game jams in Ontario cities affected by the opioid crisis including Brantford, Hamilton and Toronto.

A game jam is a game making workshop where a group of people come together to make games over a short time period, usually between 24 and 72 hours. Game jams are like musical jamming sessions, inviting a kind of furious improvisation that most creators love. But they are also community-building events energized by the spirit of collaboration, which often outweighs the act of making games.

It might seem counter-intuitive to use video games for storytelling, given that many assume gamers are all violent and antisocial — a moral panic not supported by evidence.

In the past 10 years, video games have come a long way. The emergence of autobiographical digital games about illness and health, such as Zoe Quinn’s interactive narrative, Depression Quest; Green, Green and Larson’s That Dragon, Cancer and Anna Anthropy’s Dys4ia have shaken up games culture.

Non-traditional game makers — like women and LGBTQ+ designers that don’t fit the typical profile of a developer — have reimagined video games as a powerful art for exploring personal trauma.

Free and easy to use software like Twine have accelerated a cultural awakening of computer games as an expressive vehicle for marginalized creators. Collectives have also jumped up to organize game jams and throw support behind marginalized creators with no design or programming experience — like DMG in Toronto and Pixelles in Montréal.

Game jams have become powerful spaces for galvanizing creativity in disenfranchised communities and giving them creative agency and voice. 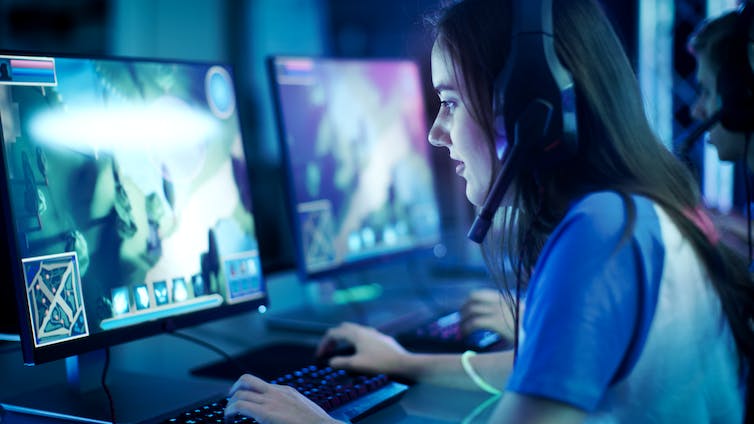 A game jam is a game making workshop where people come together to make games over a short period of time.
(Shutterstock)

I have been researching the topic of making games for mental health for eight years. In 2014, I organized my first game jam study for game designers living with depression, anxiety, bipolar disorder, post-traumatic stress disorder and other mental health conditions. The outcome of that study was my doctoral dissertation, which looked at making games about illness and disability as a rich healing and communal practice.

My research showed that digital game design enables new forms of self-awareness for young people struggling with their mental health. For example, STEM-rich practices, such as coding, engage a mode of thought called computational thinking. Although controversial in the computer science community, computational thinking allows game makers to cultivate mindfulness, especially when telling a story about themselves.

When game makers model their characters after themselves and fashion a new self, they have to find coherence in their life story, which can help them rebuild their identity and heal wounds. When creators render a story as a playable game, it also compels them to act out their characters and embody their newly fashioned self.

Game making is an art form that many aren’t intimately familiar with. Unlike other creative practices, game makers must create the rules and laws that govern and shape player behaviors. This is a powerful practice that has the potential to contribute to recovery for opioid addiction.

I hope that this approach encourages policymakers to take up creative methods to empower hard-to-reach communities and uproot the stigma that is a significant barrier to solving the opioid crisis.

US fight against opioid overdoses becomes one of racial justice: researcher