A man holds a piece of foil that he used to smoke the potent opioid fentanyl.Credit: John Moore/Getty

The US opioid crisis might soon peak and then start to abate, a new model suggests — but it also projects that overdoses will kill more than half a million people from 2020 to 2032 due to the prevalence of the deadly synthetic opioid fentanyl1.

Since 1999, some 760,000 people in the United States have fatally overdosed on opioids, including both prescription medications and illicit drugs such as heroin and fentanyl, which is frequently cut into street drugs. Treatments such as injections of the drug naloxone, which rapidly reverses overdoses, have had some success. But the number of deaths continues to increase each year.

To quantify how policy decisions have affected national patterns of opioid use and overdose, Mohammad Jalali, a systems scientist at Harvard University in Cambridge, Massachusetts, and his colleagues collected federal data on use and deaths across the United States between 1999 and 2020. They built a model that incorporated aspects of the opioid crisis that have changed over the past 20 years — factors such as the price of heroin, the number of opioid prescriptions, the prevalence of fentanyl and the distribution of naloxone.

The model relied heavily on feedback loops: an increase in fatal overdoses due to the presence of fentanyl, for instance, might raise concern within a community and decrease overall use. This design successfully replicated how certain factors and interventions affected use, treatment, relapse and overdose deaths over 20 years. “We are dealing with a complex web of interconnected factors,” Jalali says. “As soon as you touch one part of the system, other parts are touched as well.” 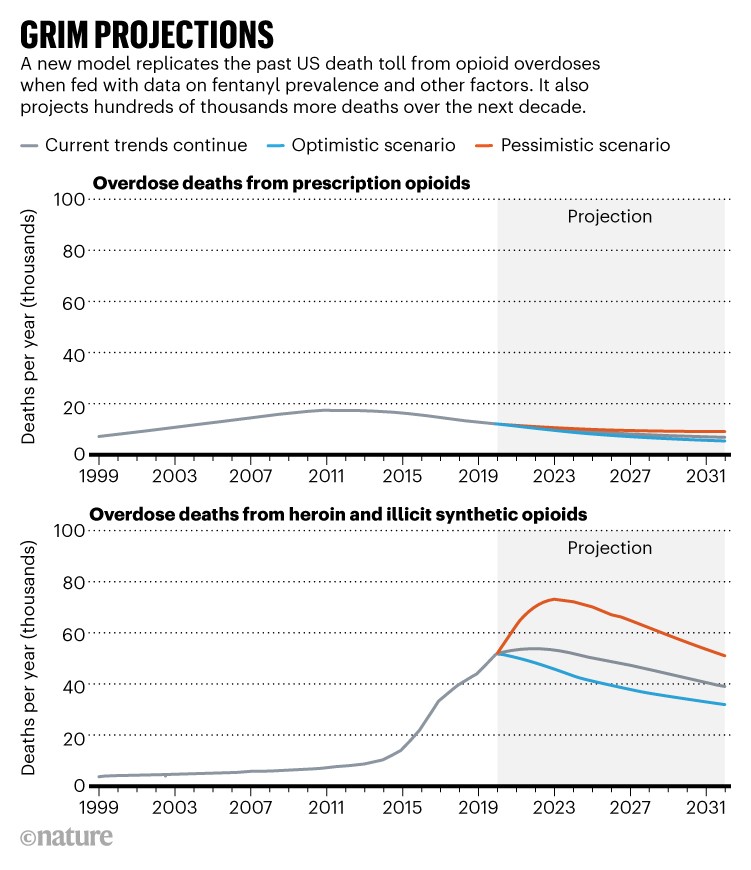 The researchers then projected future scenarios assuming various policy choices and other factors. Under any scenario, they found, overdose deaths are likely to peak before 2025 and then decline. Tse Yang Lim, a systems dynamics researcher at the Massachusetts Institute of Technology and an author on the paper, says this contradicts the widespread assumption that because overdose deaths have gone up, they will continue to go up. “This is where a dynamic model becomes important,” he says.

The researchers also determined which policy interventions were likely to have the greatest impact. Restricting prescriptions, for instance, would have very little effect, as most deaths are now caused by illicit fentanyl. But distributing naloxone or increasing the availability of addiction treatment would push the projections towards the more optimistic scenario.

“I thought this was just a tremendous amount of work,” says Brandon Marshall, an epidemiologist at Brown University in Providence, Rhode Island. The model, he says, quantifies how mistakes in policymaking have determined the epidemic’s pattern. “Witnessing more opioid deaths is a policy choice,” he says.

But Marshall points out that the feedback loops might be more complex than they seem. His own unpublished research, for instance, suggests that overdose deaths might increase stress and trauma in a community, thereby leading to more opioid use.

Jalali and his team are planning to expand the model to address some limitations. The model does not account, for instance, for the number of people who use stimulants such as cocaine or methamphetamine that, possibly without the user’s knowledge, are laced with fentanyl.

Lim hopes that the model will help policymakers and other scientists think about the big picture rather than just how a particular community or demographic is affected. “Simply getting people to think in this systemic and systematic way about how pieces fit together will be a benefit of this work,” he says.

Drug overdose deaths up again in Virginia in 2021