FORT WORTH – The pressure to perform in baseball is always present. So is the strain on arm and shoulder muscles from throwing pitches at speeds close to 100 mph.

The result for some was help in the form of a little pill.

A federal criminal trial concerning the overdose death of a major league baseball pitcher is highlighting — in stark and tragic detail — the problem of opioid abuse in the sport.

Former Los Angeles Angels communications director Eric Prescott Kay is on trial for allegedly supplying pitcher Tyler Skaggs with the fentanyl-laced painkiller that reportedly caused his overdose death. Skaggs, 27, was found dead in a hotel room in Southlake on July 1, 2019, before the start of what was supposed to be a four-game series against the Texas Rangers. Federal prosecutors rested their case on Tuesday after the powerful testimony from players.

The fentanyl, more than 100 times as potent as oxycodone, was likely what killed Skaggs, a Parkland Memorial Hospital physician and toxicologist said Tuesday. dr Stacey Hail tested for the government as an expert witness.

Prosecutors said Kay also supplied other Angels players with oxycodone from 2017 to 2019 and kept doing so even after some had left the team. Some of those players tested on Tuesday at the trial, now in its second week, about their purchases and use of the drug.

Although drug use among professional athletes is almost as old as sport itself, it’s rare for players to talk openly about it in a courtroom.

“It was just a bad decision,” former Angels infielder CJ Cron said about his drug use on the witness stand.

Former Los Angeles Angels employee Eric Kay, left, walks out of a federal court building where he is on trial on federal drug charges, in Fort Worth on Tuesday, Feb. 15, 2022. Kay is accused of providing Tyler Skaggs the drugs that led to the pitcher’s overdose death in 2019. (LM Otero / ASSOCIATED PRESS)

The oxycodone pills, known as “blues” for their color, were dropped off in players’ lockers and in their hotel rooms, according to testimony. The players bit, crushed and snorted the drug to ease the constant pain — even in the clubhouse and dugout.

Cron, currently a first baseman for the Colorado Rockies, said he obtained oxycodone from Kay about eight times to help with pain from surgeries. He said he paid Kay $30 per pill and that the Angels publicity man was his only drug source.

While the players kept their drug use a secret, they discussed it among themselves, testimony and other evidence showed.

During a game in 2018, for example, Cron texted Skaggs, “I need a mid-game blue.” He said Tuesday that it was meant in “jest.”

Matt Harvey, who pitched for the Angels in 2019, told the jury about his experiment with painkillers as well as his use of cocaine, saying he told Skaggs that the illegal stimulant was “more my thing.”

Harvey also told jurors he once obtained oxycodone for Skaggs at his teammate’s request.

“You go through a lot of injuries” and need help with it, said Harvey, who acknowledged having undergone three surgeries.

Defense Attorney Michael Molfetta put this question to Harvey: Players are desperate to stay in the majors and will do just about anything to play without pain? Harvey agreed.

Former Angels pitcher Mike Morin testified that Skaggs introduced him to Kay as someone who could provide him with painkillers he needed for his arm. Morin said Kay told him to leave cash in his locker cubby and that Kay would leave the blues there.

Morin said he and Skaggs, with whom he was good friends, would discuss their use of the pills. Skaggs once sent him a text, “About to crush a blue right now.”

Skaggs’ widow, Carli Skaggs, jurors told her husband suffered through a lot of injuries and major surgeries during his baseball career that caused him stress because he wanted to win games.

“He just wanted to be there for his teammates,” she said.

Kay, 46, was known to distribute the pills to Skaggs and others at the Angels’ stadium, a federal criminal complaint says. He was indicted by a grand jury in October 2020 on charges of drug distribution and drug conspiracy. If convicted, he could face up to life in prison.

Prosecutors in their questioning were able to get the former Angels players to tell jurors that Kay was their only source for oxycodone.

But on cross examination, the players admitted they did not know who gave Skaggs the fentanyl-laced pill that prosecutors say killed him.

Skaggs’ death shook Major League Baseball and was an indicator that the opioid crisis that’s claimed the lives of more than half a million Americans since 1999 has not spared professional athletes.

Soon after, the league announced changes to its drug policies and began requiring testing for cocaine, fentanyl and opioids. Those who test positive must enter a treatment program. Players who refuse are subject to discipline.

Harvey, testing under immunity, told jurors he took some blues with Skaggs once at the stadium and saw his friend crush and snort them in the bathroom. He said he immediately figured Skaggs had overdosed when he learned of his death.

Kay would ask his drug suppliers to meet him at the stadium and offer them team memorabilia in exchange for the oxycodone pills, prosecutors said in court filings.

“Kay would use his work time and his work location, when he was in proximity to the players, to obtain controlled substances,” Assistant US Attorney Lindsey Beran wrote in an August 2021 filing.

Carli Skaggs, the widow of Tyler Skaggs, walks out of a federal court building after testing in Fort Worth on Tuesday, Feb. 15, 2022.
(LM Otero / ASSOCIATED PRESS)

The defense team, however, argued that Kay last gave Skaggs drugs in California and that there’s no way to know whether fentanyl led to his death.

Beran told jurors during opening statements last week that the evidence would show that Kay was the only one who could have provided the drugs that led to Skaggs’ death. She characterized him as being more concerned about protecting himself than caring about the welfare of Skaggs’ family.

“There was only one person that went to Tyler Skaggs’ hotel room and lied to the police about it,” Beran said.

Kay, who struggled with addiction to painkillers, served as the players’ public relations contact on road trips. He was placed on leave shortly after Skaggs’ death and never returned to the team.

Beran said Kay, who obtained oxycodone pills online — among other places — would often ask suppliers if the pills contained fentanyl, indicating he knew the danger of the drug.

The Tarrant County medical examiner’s office determined that Skaggs had a toxic mixture of alcohol, oxycodone and fentanyl in his system and choked on his own vomit. If not for the fentanyl, he would not have died, authorities said.

Kay at the time was on his first trip since being away from the team for about a month for treatment of an addiction to oxycodone. Defense attorney Reagan Wynn told the jury Kay’s addiction to painkillers went back years and that Kay first connected with Skaggs during spring training in 2014. 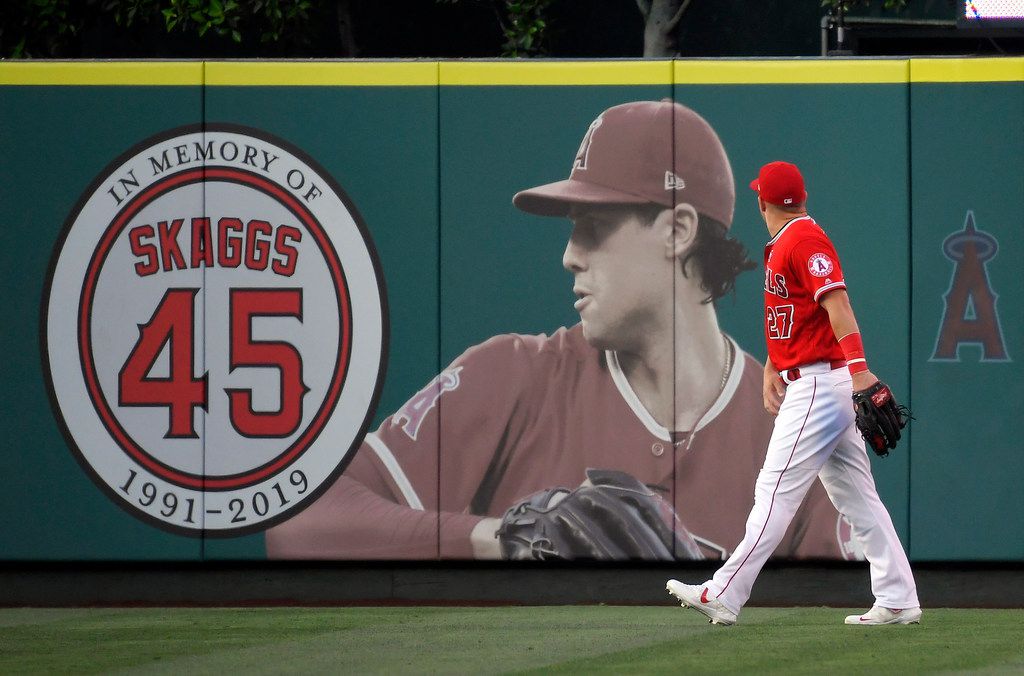 Los Angeles Angels center fielder Mike Trout walks by a picture of Tyler Skaggs in center field before a baseball game against the Baltimore Orioles in July 2019, in Anaheim, Calif, just weeks after Skaggs died from a drug overdose. (Mark J Terrill / AP)

Kay was among the people interviewed by police about Skaggs and said he hadn’t seen the pitcher since they checked into the hotel and didn’t know whether he was a drug user. But text messages and key-card records indicated that the two had discussed pills late June 30 and that Kay had gone to Skaggs’ room that night, according to court records in the case.

Kay, who had worked for the Angels for more than two decades, initially cooperated with investigators and named other players who had used opioids.

The Angels have said that no one in the team’s management was aware that an employee was providing players with the drug.

Hail, the Parkland toxicologist, said Skaggs was found alone on his hotel bed, where he likely lost consciousness and drew his final breaths. Fentanyl, she said, is so dangerous because it can slow a person’s breathing until it stops completely.

Wynn got Hail to acknowledge that one could not rule out the possibility that Skaggs could have died from alcohol and oxycodone.

But Hail said she based her professional opinion on the totality of the evidence. She compared fentanyl’s potency to the impact of a shotgun blast on the heart muscle.

The Associated Press contributed to this report.