Opinion: I used agree with Kenney and Poilievre on criminalizing drug users, but I was wrong 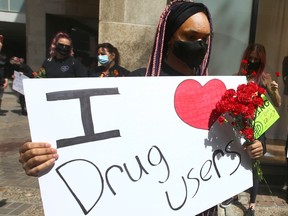 Supporters gather in downtown Calgary on Friday, June 11, 2021, in a show of solidarity with drug users. The “war on drugs” rhetoric from Premier Jason Kenney and Conservative leader candidate Pierre Poilievre is not a compassionate and productive approach to the issue of drug addiction, writes Benjamin Perrin. Jim Wells/Postmedia

Last week, Alberta Premier Jason Kenney, along with federal Conservative leadership candidate Pierre Poilievre, spoke strongly in favor of criminalizing people who use drugs. I used to agree with them. I was wrong and so are they.

What changed my heart and mind was meeting with people who use drugs, police, prosecutors, judges, public health experts and loved ones whose children have died. And I read the research. All of these sources said criminalizing people who use drugs makes things worse.

Despite a chorus of health experts and the Canadian Association of Chiefs of Police supporting decriminalizing simple possession, many politicians seem intent on continuing the failed “war on drugs” approach: criminalize people for using drugs to reduce demand, and seize more and more drugs to reduce supply.

First, let’s talk demand. Kenney and Poilievre want to continue criminalizing people who use drugs, and so does Prime Minister Justin Trudeau outside of British Columbia. The record is clear that this has been a catastrophic policy failure.

Over 27,000 Canadians have died from drug overdose since 2016. Most had substance use disorders: chronic medical conditions defined by an inability to simply “stop using.” Research shows criminalization contributes to stigma, using alone and using faster — all of which increase the risk of death.

Addictions have their roots in peer influence, genetics, concurrent mental health disorders and childhood trauma. Someone who experienced moderate to severe childhood trauma is 7-10 times more likely to turn to substances to cope.

I regularly hear from people who started using as young as 11, 12 and 13 to cope with physical and sexual abuse, neglect and being exposed to family violence. Kids as young as 12 have died of an overdose. Often parents had no idea they were using. Studies show they’re also at elevated risk of being imprisoned, often related to substance use.

Alarmingly, Kenney revealed last week that since 2017, 50 per cent of people who fatally overdosed in Alberta were locked up in provincial correctional centers in the two years before their death. Kenney seems to think this helps his case for criminalization. How perverse and heartless.

Dalhousie University researchers note that “in the two weeks after release, a prisoner’s risk of overdose is more than 50 times higher than in the general population.” In other words, jails are a death sentence for many people with substance use disorders.

Moms Stop the Harm is a powerful group of surviving family members calling for a compassionate, evidence-based approach that includes ending the criminalization of people who use drugs. Why won’t Kenney and Poilievre listen to these grieving parents about what would have helped their kids?

Second, let’s talk supply. Poilievre is demanding harsher sentences for traffickers, which research shows doesn’t deter. But it does cost taxpayers billions. The vast majority are street-level folks who themselves are addicted.

Among Kenney’s ideas is to “increase resources to the Canadian Border Services Agency in support of efforts to interdict these deadly and dangerous drugs.”

Fentanyl is the synthetic opioid driving the opioid crisis. It enters from places like China. I interviewed top CBSA officials who told me 1.9 million pieces of mail enter Canada from China on average every single month. They have found fentanyl powder in packages as small as greeting cards, since it is 30-50 times more potent than naturally occurring heroin.

The CBSA told me it is “impossible” to screen all of that mail. Kenney’s plan is to look for a needle in a haystack. Even if we succeed, fentanyl can be readily made here with basic college chemistry skills and equipment.

Some conservatives get it. The Cato Institute (a US-based libertarian think tank) supports decriminalizing drugs as does former UK Conservative leader William Hague. And it was a Republican, Richard Cowan, who described the “Iron Law of Prohibition” in 1986: “the more intense the law enforcement, the more potent the drugs become.” More potent drugs are less bulky, so one is less likely to get caught.

With US alcohol prohibition, the potency of alcohol products increased by 150 per cent. With drug prohibition, while hundreds of tons of heroin, cocaine and cannabis were seized between 1990 and 2007, average purity of heroin increased by 60 per cent, cocaine by 11 per cent and cannabis by 161 per cent. And that was before fentanyl hit the market. Prices adjusted for inflation and relative purity dropped during that period on average by 81 per cent for heroin, 80 per cent for cocaine and 86 per cent for cannabis. Prohibition led to more potent and cheaper drugs.

We need to help people stay alive and, when they’re ready, get into treatment. This includes decriminalizing people who use drugs, overdose prevention sites, a safe regulated supply to replace toxic street drugs, and evidence-based treatment and recovery — not 28-day detox programs that the British Medical Journal found increase the risk of overdose deaths — again due to relapses after tolerance has decreased.

There isn’t any evidence to back Kenney and Poilievre’s “war on drugs” policies. Their ideologically driven crusade is cruel, costly, ineffective and deadly.

Benjamin Perrin is a law professor at the University of British Columbia and the author of Heartbreak and Hope in Canada’s Opioid Crisis. He was former prime minister Stephen Harper’s lead criminal justice adviser from 2012 to 2013.

Sign up to receive daily headline news from the Calgary Herald, a division of Postmedia Network Inc.

The next issue of Calgary Herald Headline News will be in your inbox soon.

America’s response to addiction relies on fixing this website