Adolescents from lower-income backgrounds are more likely to report addictive use of social media, according to an international team of researchers including McGill University Professor Frank Elgar. The findings show a link between economic inequality and problematic use of social network platforms and instant messaging applications. The researchers identified problematic social media use in teens who reported six or more addiction-like behaviors, such as feeling bad when not using social media, trying but failing to spend less time using it, and using social media to escape from negative feelings. The situation is worse in schools where differences in wealth between classmates are greater. The authors say the results – based on more than 179,000 school children in 40 countries – suggest that new strategies are needed on social media use that promote ways to disengage. Action by policymakers could help limit young people’s harmful behaviour, add the authors. These negative patterns include being unable to reduce screen time or lying to friends and family about social media use.

Can an equal world reduce problematic social media use? Evidence from the Health Behavior in School-aged Children study in 43 countries, by Michela Lenzi, Frank Elgar et al., was published in Information, Communication and Society. 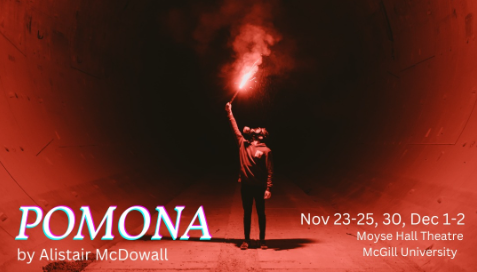 Keep your eyes shut no matter what – November 23-Dec 2

From physics and chemistry to cultural studies, students from across McGill University are taking part in a play that is both mystery and thriller and opens this week. Pomona is a dark cross between Stranger Things, Raiders of the Lost Ark and the stories of HP Lovecraft and tells the story of a young woman who is coerced into taking part in a Dungeons & Dragons-like role-playing game as she searches for her lost sister in a nightmarish underworld. Prof. Sean Carney, from McGill’s Department of English, directs the play and acted in theater productions throughout his student days. For him, it’s a chance to introduce the students to contemporary British theatre, one of his areas of expertise. According to Carney, the play, written by Alistair McDowall in 2014, offers a message about how we negotiate a path through a world that has been created for us where stuff seems to go wrong all the time.

Audiences can begin to venture into the world of Pomona on the following dates: November 23-25, November 30, and December 1-2 at the Moyse Hall Theater, at 7:30pm.