TABOR refunds, abortion rights, mental health and more: here’s what the Colorado legislature did in 2022

After hours of tributes, a brief harp recital, and lots and lots of waiting for negotiations on a final handful of bills, lawmakers wrapped up their annual legislative session just minutes before the midnight deadline Wednesday.

In the House, a late night of passionate debate over a sweeping fentanyl bill turned to collegiality as the chamber gathered to sing an off-key rendition of Happy Birthday to two lawmakers while waiting for the final procedural moves needed to adjourn.

With an election looming, the makeup of next year’s legislature is guaranteed to be different, adding extra emotion to the day’s proceedings.

“It’s been an honor to serve with every one of you here,” Republican Rep. Perry Will told his colleagues after his birthday serenade. “I know, myself, I have a tough race to do. Don’t know if I’ll be back… Hopefully it’s not my last hoorah, but if it is, it’s been nothing but a blessing and an honor.”

Hart Van Denburg/CPR NewsRepublican state Reps. Mike Lynch, Richard Holtorf and Perry Will, from left, in the House chamber on Wednesday, May 11, 2022, as the legislature wrapped up its final day of the 2022 session.

The chambers’ Democratic majorities passed a number of high priority bills for the party in recent months, such as the Reproductive Health Equity Act and new election security measures. However, despite being an election year, many of the session’s most significant policies were bipartisan efforts.

Lawmakers worked together on a late-session effort to move up the timeline for giving Coloradans tax refunds under the Taxpayers Bill of Rights. They also collaborated on bills to spend more than a billion dollars of federal relief money on housing, behavioral health and economic development.

The final week of work was a blur of long days and occasional partisan showdowns as both chambers rushed through their jam-packed calendars.

Here are a six big takeaways from the session that just ended:

The governor showed his power on issues like unions and taxes.

With total Democratic control of state government, many of the legislature’s sharpest fights in recent years have been intraparty struggles, between liberal legislative leaders on the Capitol’s second floor, and the more libertarian-leaning occupant of the governor’s office, one story down.

Governor Jared Polis hasn’t hesitated to wade into policy battles, exerting his effort early on to reshape — or doom — bills he opposes before they can find their way to his desk.

One issue where this power struggle came to the fore this year was public sector organizing rights.

Going into this session, top Democratic lawmakers announced a bold plan to grant new union rights to practically every public employee in the state — more than 400,000 workers for libraries, cities, colleges, schools and more.

But even before it was officially introduced, that sweeping proposal had been narrowed to a fraction of the original idea. Backers settled for only extending organizing rights to county employees, and they won’t get some core union rights like the ability to strike.

The bill had more than 500 amendments as it moved through the statehouse, narrowing it even further, and most of the changes Democrats agreed to were to appear concerns from Polis. 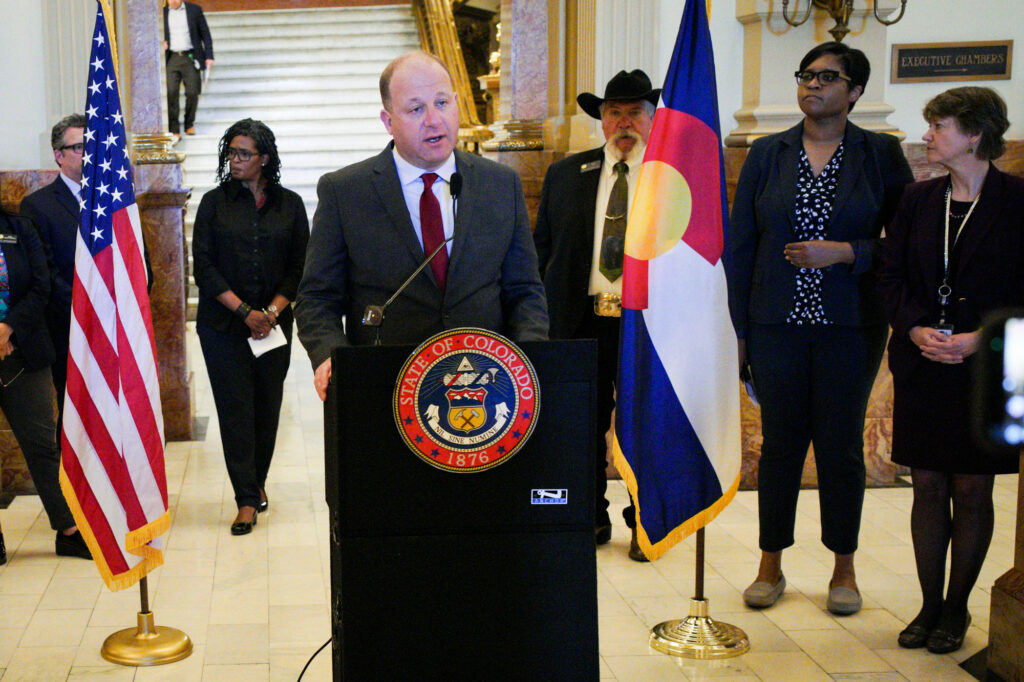 Polis also showed his influence on tax policy. His office spent weeks negotiating with an influential business group, Colorado Concern on a $700 million property tax relief package — one that lawmakers were asked to rush through in the final two weeks of the session. That left some progressive groups complaining that they’d been left out of the process.

Another issue the governor weighed in on was a bill meant to help residents of mobile homes. It originally included a provision for rent stabilization, limiting how much park owners could increase the rent for the lots of people’s homes sit on. But that was removed after Polis threatened a veto, saying that it could have unintended economic consequences.

The governor’s opposition also helped ensure the death of a ban on flavored nicotine products. The bill surprised some observers by moving forward in the final days of session. But a day before adjournment, Democratic Senate leaders killed it in committee, a move that required replacing a key member who supported the bill with one who opposed it.

Polis has said decisions on banning menthol cigarettes and flavored vape products should not be made at the state level but instead by local governments. Backers of the ban have pointed out that his signature universal pre-K program is funded in part by taxes on nicotine products.

But on other issues lawmakers struck deals with Polis. 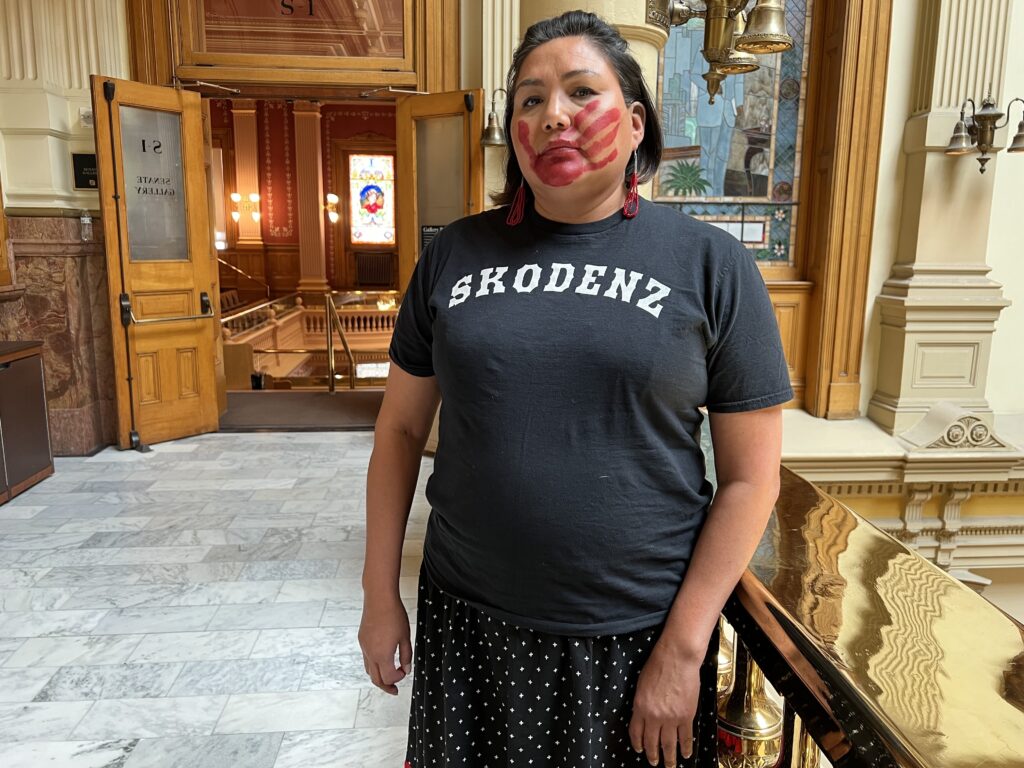 Donna Chrisjohn, who is Sicangu Lakota and Diné, work to pass the bill to create an office to improve the state’s response to the case of missing and murdered indigenous people. She is pictured at the Capitol on May 10, 2022. (CPR News/Andrew Kenney)

His administration had opposed a plan to create a new state Office of Missing and Murdered Indigenous Relatives (MMIR), saying they preferred to dedicate a team of CBI agents to the issue and create a largely volunteer taskforce instead of committing to a paid, permanent and multifunctional team.

In the final days of the session, two of the sponsors introduced a compromise amendment to get the bill passed. It still creates a new office, but with fewer powers. Sen. Jessie Danielson, a Democrat, cast it as a win for indigenous advocates.

It’s an election year, inflation is soaring, and, for now, the state government has a lot of money to spend. So, perhaps unsurprisingly, Democrats have focused on a “saving you money” message.

Polis kicked off that effort in his State of the State address, even rewriting the lyrics of a Paul Simon song to promise “more than 50 ways to save Coloradans money.”

Those ways include several temporary reductions in fees. One measure will reduce business filing fees, which can be up to $50, to practically nothing. Another will push back the start of a new gasoline fee Democrats passed last year to fund transportation projects. The initial 2-cent-a-gallon fee will be delayed nine months, to next April.

Democrats also announced a plan to move up payment of a taxpayer refund that was originally slated to go out next year. What they are calling the “Colorado Cashback” refund will be sent to all taxpayers this summer and early fall. 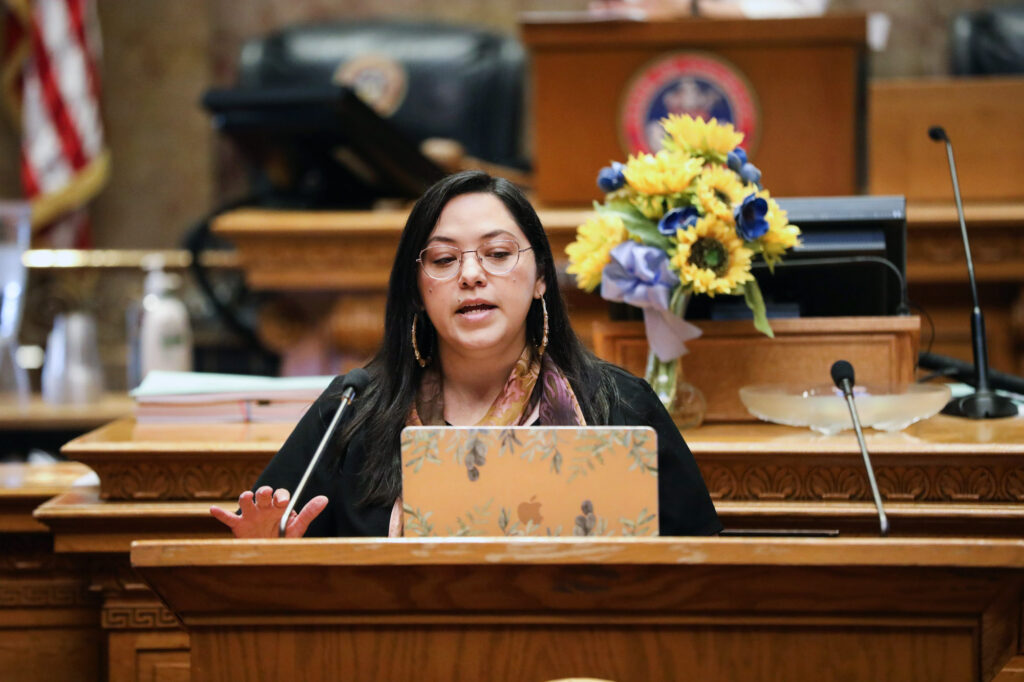 Hart Van Denburg/CPR NewsDemocratic state Sen. Julie Gonzales on Wednesday, May 11, 2022, as the legislature wrapped up its final day of the 2022 session.

The plan also changes how the money will be distributed, giving the same amount to all taxpayers — instead of using a sliding scale where higher income households would have gotten more. Originally, the plan was for each filer to get $400 ($800 for joint filers), but this week Democrats said that number could rise to $500 for individuals if the state’s budget picture improves as much as predicted.

Republicans voted for the plan, but criticized the Democrats on timing, arguing the earlier refunds are an election-year effort to curry favor with voters.

“I joked around that it’s something we all agree on: that TABOR is great,” said House Minority Leader Hugh McKean. “But at the same time, the minute we passed this, the governor sent out a fundraising email saying, ‘look what I did on TABOR.’”

Polis also led the charge on a property tax bill, which his administration is advertising as offering $700 million in total relief from rising tax bills for residential and commercial owners. (However, to offset the lost tax revenue, this measure will also result in taking away $200 million from potential future tax refunds.)

Not every money-saving measure succeeded. Democrats proposed putting $57.5 million into the voter-approved Paid Family and Medical Leave Program, in order to delay for six months the start of deductions from people’s paychecks. But that effort was voted down unanimously in the Senate’s Finance Committee as the end of the session approached.

There was a lot of federal money that needed to be spent.

Besides passing the biggest state budget ever, lawmakers also had about $2 billion in federal money to spend from the American Rescue Plan Act.

Ahead of the session they wrestled with how to use that windfall to make ‘transformational’ changes, without leaving the state on the hook for programs it won’t be able to afford once this one-time funding is used up. 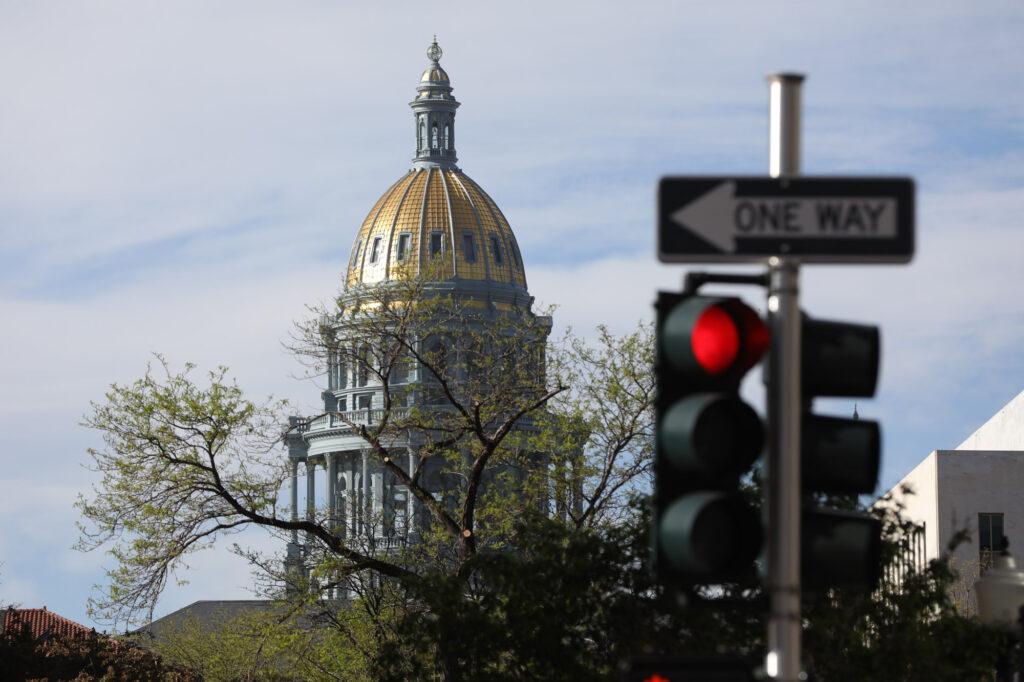 In the end, they chose to focus on the following areas in particular:

A historic investment in behavioral and mental health treatment

The nearly half billion dollars lawmakers put into behavioral health this year is the largest state investment in the system in any single legislative session.

Behavioral health advocates say in many ways Colorado had nowhere to go but up. According to recent figures from Mental Health America, Colorado ranks last in the nation in prevalence of adult mental illness versus access to care. The state does slightly better when it comes to youth.

With all of the stress, anxiety, and disruption people are feeling coming out of the pandemic, coupled with ongoing political and social divisions, health officials are bracing for even more pressure on a system they say is already failing to meet the needs of many Coloradans .

“We have had some of the nation’s highest rates of adult and youth suicide. We’ve got an opioid epidemic on our hands,” said Vincent Atchity, the President and CEO of the non-profit Mental Health Colorado. “So we’re in a critical condition on the extreme side of things in so many ways.” 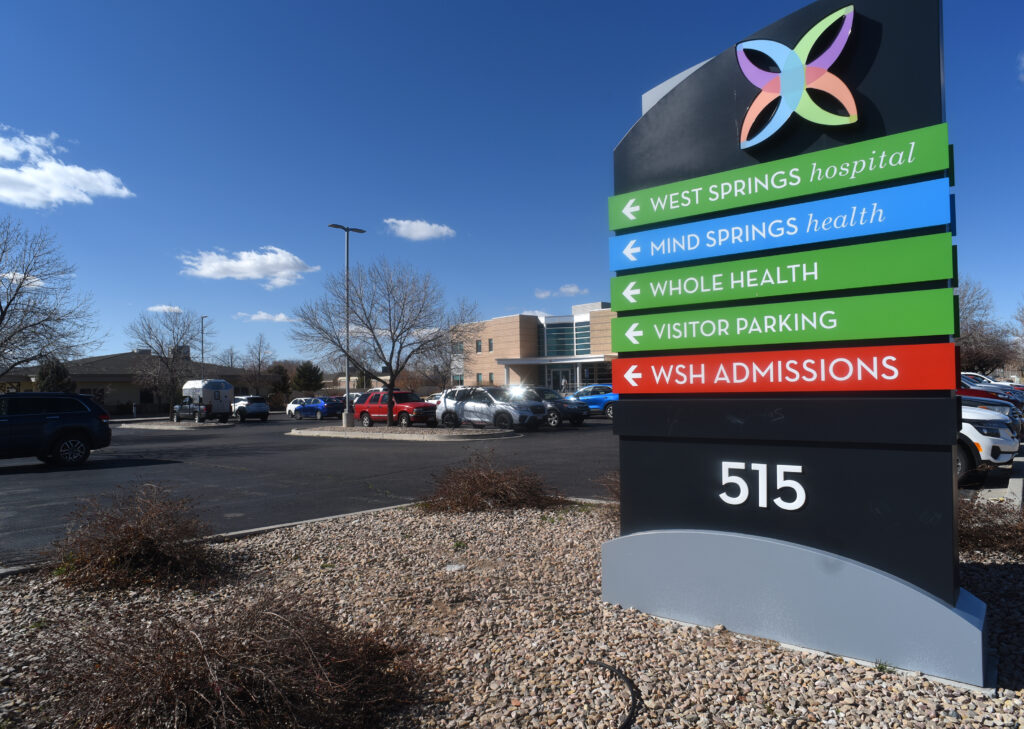 This year’s big proposals include measures to add more capacity for adults and children who need full time residential treatment as well as bills to streamline administration of the overall behavioral health system to try to make it more efficient and transparent. Lawmakers also funded grants to address gaps in the current system and to support youth, families and schools.

Drug overdose deaths an ongoing problem in BC – Revelstoke Review

217 Today: One community college is fighting the stigma of…