Telehealth controversy: Should it be ok to prescribe addiction meds virtually? : shots 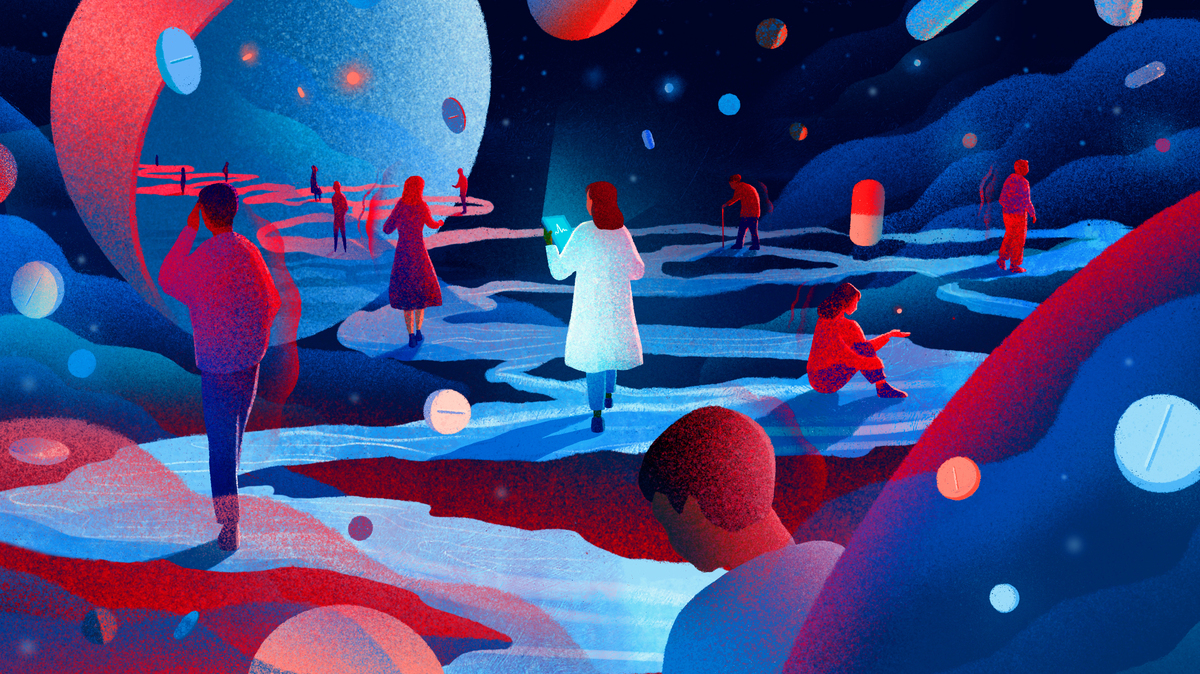 Dennis Gaudet’s home in central Maine is surrounded by Fields and woods, and many miles away from anyone able to treat his opioid use disorder.

“I was on a waiting list to get in to see a psychiatrist for over two years, [and] since the pandemic began, nobody was accepting new patients,” says Gaudet, 48, who’s spent over half his life struggling with an addiction that began with painkillers prescribed after he suffered injuries on a construction job.

The lack of available treatment options, he says, has left a mark on his community and his own life; in the past three years, Gaudet has lost six friends to overdoses.

But last year, thanks to pandemic-related relaxations of prescribing rules, Gaudet was able to get treatment from a clinic in California with an addiction specialist licensed in Maine that he says has helped him through many a mental health crisis. The telehealth clinic also fills his prescriptions for buprenorphine, a regulated drug that curbs his cravings.

Without it, he says, “I would’ve gone back on the streets and done heroin and fentanyl again.”

A temporary easing of regulations

A growing number of Americans with opioid use disorder have benefitted from a rule change early in the pandemic that allowed them to access prescriptions of their controlled medications, via telehealth. These medications, which are themselves opioids, are heavily regulated by the Drug Enforcement Administration.

Normally, a patient must see their doctor regularly — in person — to get the medications. But at the outset of the pandemic, the DEA and all 50 states temporarily suspended those safeguards, even allowing prescribing by out-of-state physicians, a practice normally prohibited by medical boards.

At a time when opioid overdose deaths were spiking, those temporary telehealth expansions not only helped patients work around pandemic lockdowns, but they also eliminated some common barriers to care that have plagued addiction treatment, like a shortage of health care providers able to prescribe them, lack of transportation to get to the doctor, or having a suspended driver’s license. These allowances were pegged to state or federal states of emergencies, so once those come to an end — absent new legislation — the pre-pandemic rules will come back, including requirements to see a doctor in person for a prescription.

For some clinicians and regulators, a return of the earlier rules is necessary to protect against prescription drug abuse. After all, lax regulatory oversight in 1990s gave rise to painkiller pill mills, which fueled the country’s original opioid epidemic. Others argue reverting back to the old way of treatment will set back patients trying to fight their opioid addiction.

This is why virtual prescribing of controlled medications is telehealth’s most controversial frontier.

And that puts policymakers in a tough spot.

“You have people who are really in need of this and telehealth could really help them,” says Courtney Joslin, resident fellow at the R Street Institute, a free-market think tank. “On the other end, you do have that hesitancy because of the pill mill problem, previously, [so] you could have some abuse from both patients and providers using telehealth to get controlled substances.”

Telehealth’s expansion and a missing database

Telehealth’s growth — estimated by McKinsey to have expanded 38-fold since the pandemic — has spawned a flurry of state and federal legislative proposals. In deciding the future of telehealth rules, policymakers are looking for data to figure out the lessons learned — what worked, what didn’t — during this emergency period.

“We’ve now had 18 months to have telehealth expand dramatically; it would be a huge mistake to roll back that progress,” Warner says. “If you cut off that ability to deliver those substances with appropriate protections, you’re really cutting back on the path to recovery for a lot of folks.”

Yet of the estimated 1,000 telehealth bills pending before state and federal lawmakers now, very few mention controlled medications. That’s partly because Congress already passed a law in 2018, directing the DEA to set up a registry of physicians authorized to prescribe regulated drugs using telehealth.

More than two years after the deadline, that database doesn’t exist. The DEA declined to comment on when it might be completed.

“The DEA kept on saying they’re going to do that, but there has been no action taken,” says Kyle Zebley, vice president of public policy for the American Telemedicine Association.

“Now we have millions of Americans — so, a huge cohort — that are relying on virtual online prescribing of controlled substances and that will go away,” he says. “An already heightened opioid and substance use crisis will be significantly exacerbated.”

A debate about the limits of telemedicine

The medical community, meanwhile, is of two minds about the trade offs.

In November survey by drug-testing company Quest Diagnostics, 75% of physicians who prescribe opioids said telehealth limits their ability to determine whether patients are potentially misusing drugs. On the other hand, many say they have found they can help more patients in urgent need of care.

There is always a risk that some patients and doctors may try to abuse telehealth rules to divert drugs, says Huntington, Calif., addiction specialist, Joseph DeSanto. But last year, DeSanto found more benefit than downside; during the pandemic, he was able to care for 20 patients living out of state.

“We could treat anyone, anywhere in the US,” until California returned to its old rules earlier this year, DeSanto says. “The response was resoundingly positive, and we were able to see patients that wouldn’t normally have gotten help,” he says.

For example, DeSanto says, he treated one Tennessee man in his early 30s, who called DeSanto from a rural area where addiction doctors are practically unheard of. During lockdown, the man relapsed on opioids — something DeSanto says was common for patients. DeSanto prescribed the patient buprenorphine to fight his addiction until the patient located a doctor in state.

“It gave him some time, and I’m not sure if he would’ve had that time if he relapsed and didn’t realize that he had the ability to see a doctor that wasn’t local to him,” he says.

On the other hand, there are downsides to relying so heavily on virtual-only treatment, says Dr. Anna Lembke, a psychiatrist and professor of psychiatry at Stanford.

“We’ve seen an increased number of patients who told us that they were doing fine — saying they were taking their buprenorphine — who then overdosed from fentanyl,” she says. “In retrospect [we] wonder [if they] would have been caught if we had been getting regular urine [toxicology] screens, or had we been seeing them in person.”

Lembke says telehealth has transformed the mental health field. It allowed her outreach to expand to include people who couldn’t access care in the past, for example, but she’s also keenly aware of the risks. She wants to see better tools to enable remote monitoring of patient biomedical information, like urine tests and blood pressure.

“I think that there are probably a lot more patients that are not doing well that we don’t know about,” Lembke says. “We don’t have a good handle on who is doing well and who isn’t, because when patients relapse, part of the disease is they don’t tell the truth about what’s going on with them.”