The Player-Coaches of Addiction Recovery Work Without Boundaries

But her visit on a Wednesday morning in mid-October was one of her first with teeth.

The specialist, Donna Norton, had pushed Wright to go to the dentist years after homelessness and addiction had taken a toll on her health, down to the jawbone.

Wright was still getting used to her dentures. “I haven’t had teeth in 12½, 13 years,” she said, adding that they made her feel like a horse.

A new smile was Wright’s latest milestone as she works to rebuild her life, and Norton has been there for each step: opening a bank account, getting a job, developing a sense of her own worth.

Wright’s voice started to waver when she talked about Norton’s role in her life during the past few months. Norton wrapped her arms, adorned with tattoos of flames, spiderwebs, and a zombie Johnny Cash, around Wright.

Norton, 54, is a Harley-riding, bulldog-loving, eight-years-sober grandmother and, professionally, “a cheerleader for the people that look bad on paper.”

People like her. “If you were to look me up on paper, you wouldn’t be in this room with me,” Norton said. “You would not let me near your house.”

If she were a therapist or social worker, hugging and sharing her experiences with drugs and the law might be considered a breach of professional boundaries. But as a peer support specialist, that’s often part of the job.

A big part of Donna Norton’s job as a peer support specialist with the Hornbuckle Foundation is building relationships with people in the early stages of recovery from substance use disorders. Norton draws from her own history with addiction, homelessness, and the justice system to help them get back on their feet.(Rae Ellen Bichell / KHN)

Norton works for the Hornbuckle Foundation, which provides peer support to participants in the SAFER Opportunities Initiative. SAFER provides short-term shelter in the hotel for people in Arapahoe County who are homeless and have mental health or substance use disorders.

Peer support specialists are themselves in recovery and are employed to help others. As billions of dollars in opioid settlement funds roll out to states and localities, local leaders are deciding what to do with the money. Supporting and training peer specialists, whose certification requirements vary by state, are among the options.

States, counties, municipalities, and tribes filed thousands of lawsuits against drug companies and wholesalers that are accused of fueling the opioid crisis. Many of those cases were lumped together into one mega-lawsuit. This year, four companies settled out of court, agreeing to pay $26 billion over 18 years. Participating states must follow guidelines for how the money can be spent.

In Colorado, hundreds of millions of dollars from that settlement (and a few others) will go to local governments and regional groups, several of which submitted plans to use some of the money for peer support services.

David Eddie, a clinical psychologist and a research scientist at the Recovery Research Institute at Massachusetts General Hospital, said peer recovery support services have “been gaining a lot of traction in recent years.”

According to the Substance Abuse and Mental Health Services Administration, “mounting evidence” shows that working with a peer specialist can result in better recovery outcomes, from greater housing stability to reduced rates of relapse and hospitalization. A report by the US Government Accountability Office identified peer support services as a promising practice in treating adults with substance use disorders. In many states, peer specialists are reimbursed through Medicaid.

“They can plug a really important gap,” Eddie said. “They can do things that we as clinicians can’t do.”

They can, for example, help navigate the bureaucracy of the child protective services system, about which clinicians might have little knowledge, or take someone out to coffee to build a relationship. If a person stops showing up to therapy, Eddie said, a peer support specialist “can physically go and look for somebody and bring them back to treatment — help them reengage, reduce their shame, destigmatize addiction.”

Norton has, for instance, picked up a client who called her from an alley after being discharged from a hospital stay for an overdose.

“Some people will tell you, ‘I decided I was going to get in recovery, and I never had to drink, drug, or use again.’ That’s not my experience. It took me 20 years to get my first year clean and sober. And that was trying every day,” said Norton from her office, her Vans planted just inches from a basket that lives under her desk: It contains three opioid overdose reversal kits stocked with Narcan.

Her office, warmed by the sunlight coming through a south-facing window and the nearly constant rotation of people plopping onto the couch, contains a shelf of essential items. There are tampons, for whoever needs them — Norton will “never forget” the time she got a ticket for stealing tampons from a grocery store while she was homeless — and urine analysis kits, for determining whether someone is high versus experiencing psychosis.

She teaches “stop, drop, and roll” as a coping mechanism for when people are feeling lost and thinking about using substances again. “If you’re on fire, what do you do?” Norton said. “You stop immediately, you lay on the ground, you roll and get yourself out. So I’m like, ‘Go to bed. Just go to sleep.’ People are like, ‘That’s not a wellness tool.’”

“It is,” Audrey Salazar chimed in. Once, when Salazar was close to relapsing, she stayed with Norton for a weekend. “I literally just slept,” Salazar said. The two rested and ate Cocoa Puffs and Cheez-Its by the box.

“It was so bad,” Norton said of the junk food binge. But the weekend got Salazar back on track. Working with a peer support specialist who has “walked the same walk,” Salazar said, “holds you accountable in a very loving way.”

That October day, Norton pivoted from nagging one person to make a doctor’s appointment, to getting someone else set up with a food pantry, to figuring out how to respond to the bank that told a third client that an account couldn’t be opened without a residential address. She also worked on lowering the defenses of a newcomer, a sharply dressed man who seemed skeptical of the program. 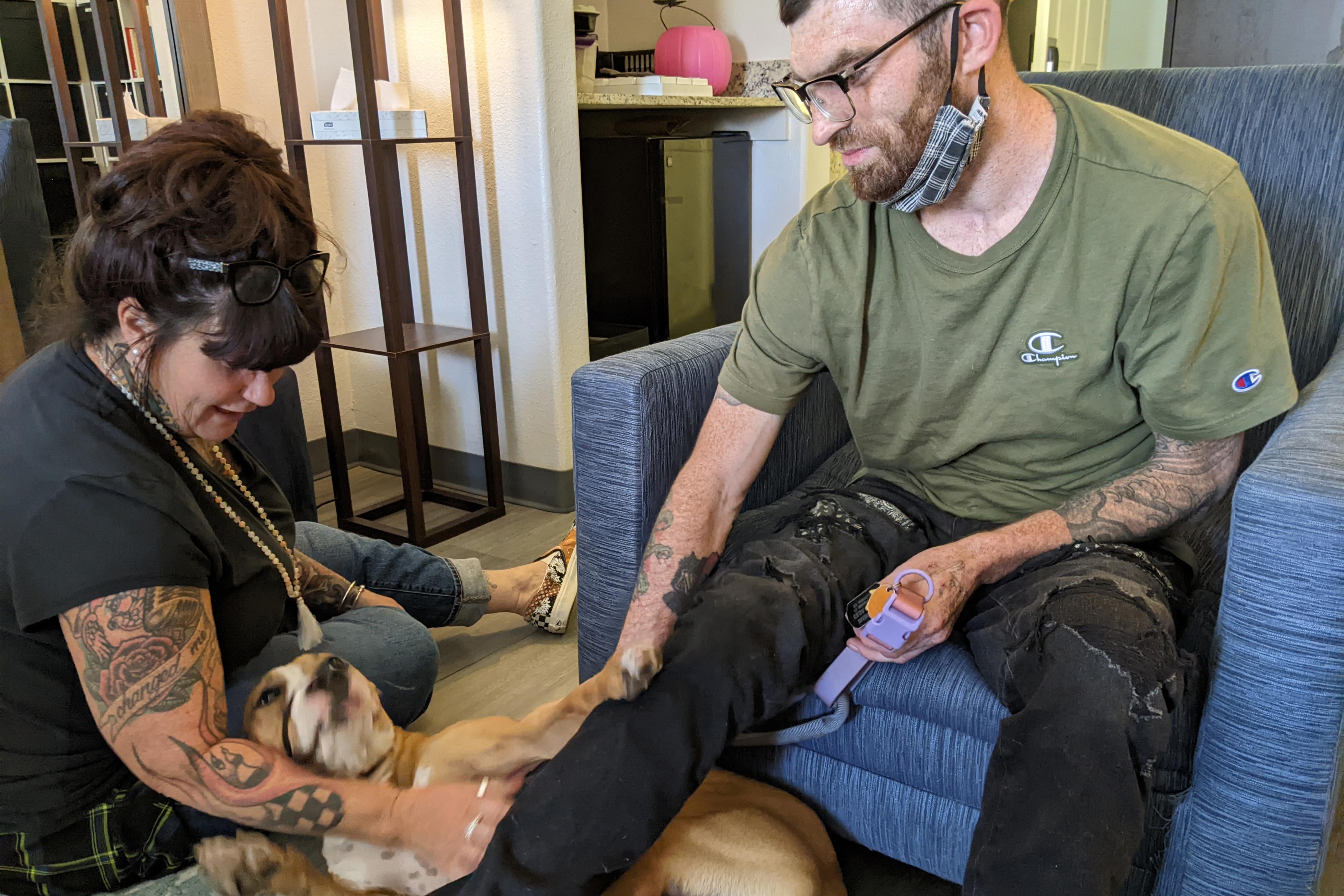 Donna Norton meets with Ian Dereus and his dog, Lola, at the hotel in Centennial, Colorado, where Norton helps people recovering from mental health and substance use disorders. Dereus is now considered a graduate and is living in his own apartment.(Rae Ellen Bichell / KHN)

Some people come to Norton after being released from the county jail, others by word of mouth. And Norton has recruited people in parks and the street. The newcomer applied after hearing about the program in a homeless shelter.

Norton decided that sharing a little about herself was the way to go with him.

“’My experience is jails and hospitals and institutions. I’ve got an old number,’ meaning a convict number. ‘And I have eight years drug-free,’” she recalled telling him. “’My office is down the hall. Let’s get some paperwork done. Let’s do this.’”

Norton is one of seven peers on staff with the Hornbuckle Foundation, which estimates that it costs about $24,000 a month to provide peer services to this group of residents, with peer specialists working full time make about $3,000 a month plus $25 an hour per client. Norton’s office is the hub of activity for a floor in one hotel where about 25 people participating in the SAFER Opportunities Initiative live while recovering from substance use disorders until they “graduate” to another hotel, located next door. From there, they’ll move on to their own housing, which staffers often help them find.

While in the program, residents meet at least once a week with a case manager, a therapist, and a peer support specialist, in addition to attending group meetings, which take place every day except Sundays and are all run by peers.

Kyle Brewer, based in Arkansas, is the peer specialist program manager for NAADAC, the Association for Addiction Professionals (formerly the National Association for Alcoholism and Drug Abuse Counselors). Brewer, who said his life was derailed after he started using prescription opioids to manage the pain from a wisdom tooth removal, said opioid settlement funds present an opportunity to support the people who work on the ground.

“When we’re working and talking and troubleshooting different approaches to solve the opioid crisis, we should have the people that have been directly affected by those issues in the room, guiding those conversations,” he said.

Toward the end of the day, Norton ran into the new guy in the hallway again, this time on his way back from the ice machine.

“Eight years clean. My hat goes off to you,” he said.

“I started with one day,” said Norton.

“Well, I’ll start with an hour,” said the new guy.

He said he needed to clean out his car, where he’d been living. He said he has trouble putting his jeans on in the morning after losing a thumb to frostbite. He wanted to find a part-time job. He has trauma to work through in therapy. His mother died about a year and a half ago.

Opinion | This Is the Reality of America’s Fast Fashion Addiction