Seeking to bolster Republican candidates ahead of the 2022 midterm elections, this past Saturday, ex-president Donald Trump headlined a sparsely attended fascistic rally in Youngstown, Ohio.

With the elections set to be held in just over 50 days, the rally, held in a 6,000 seat arena, was a chance for Trump to solidify his standing as the Republican kingmaker and unchallenged 2024 presidential front-runner.

However, at no point during the event, including during the crescendo of Trump’s rant, which featured an orchestral song linked to the fascist QAnon movement, which was the arena ever full. This is despite the fact that the rally was heavily promoted by Trump-aligned media and featured several current Republican politicians speaking before the former president.

In a first for a Trump rally, the small crowd, likely encouraged by political operatives working on behalf of the ex-president, held up their index finger as the QAnon song was being played. The gesture is popular among pro-Trump and QAnon elements, including members of fascist Nicholas Fuentes’ “America First” group.

The overt appeals in Trump’s address to the right-wing QAnon conspiracy is the would-be dictator’s response to ongoing investigations by the US Justice Department into his failed coup and his pilfering and storing of classified documents at his Mar-a-Lago resort after leaving the White House.

Last Monday, CNN reported and several other outlets confirmed that Trump’s former chief of staff, Mark Meadows, and one of his top deputies, Ben Williamson, recently complied with a subpoena issued by the US Department of Justice (DoJ) concerning their role in Trump’s failed coup.

Citing anonymous sources, CNN claimed that Meadows turned over thousands of text messages and emails to the DoJ which he had previously given to the January 6 House Select Committee.

The following day, Trump co-conspirator and fellow speaker at the Youngstown rally, MyPillow founder Mike Lindell, had his cellphone seized by FBI agents. The FBI confirmed the seizure of Lindell’s phone but did not state the nature of the investigation. Lindell claimed in an interview with the Washington Post that the FBI agents asked him questions about images posted on his website, Frank Speech, concerning a voting machine from Mesa County, Colorado.

As Lindell was being questioned by FBI agents, Trump spoke on the phone with Micki Witthoeft, mother of QAnon fascist and deceased Air Force veteran Ashli ​​Babbitt, outside the Washington DC jail. During the phone call, Trump reiterated his support for Babbitt, who was shot by a cop while storming the Capitol on January 6. “The Radical Left haters cannot be allowed to get away with this. There must be justice,” Trump told Babbitt’s mother.

In his speech Saturday, Trump presented himself as a Christ-like savior who was “right about everything” for which he was being “persecuted” by a “sick and deranged political establishment…like no other president or anyone else else in American History.”

Trump told the few thousand right-wing supporters in attendance that a “cruel and vindictive political class” was “coming after you through me,” and that “they want to target you for destruction.”

Trump said that the “thugs and tyrants” coming after him and his supporters had “no idea of ​​the sleeping giant they have awakened. The American people will never accept the corruption and ruination of our country.”

Trump reiterated his demand that the US government adopt show trials, complete with mass executions of suspected “drug dealers and human traffickers.”

Trump falsely claimed that a single “drug dealer” was responsible for an average of “500” deaths throughout their lifetime. Fashioning himself after former Philippines president Rodrigo Duterte, Trump said that the introduction of “quick trials” followed by the executions of “drug dealers” would result in a “more than 75 percent” decrease in crime. 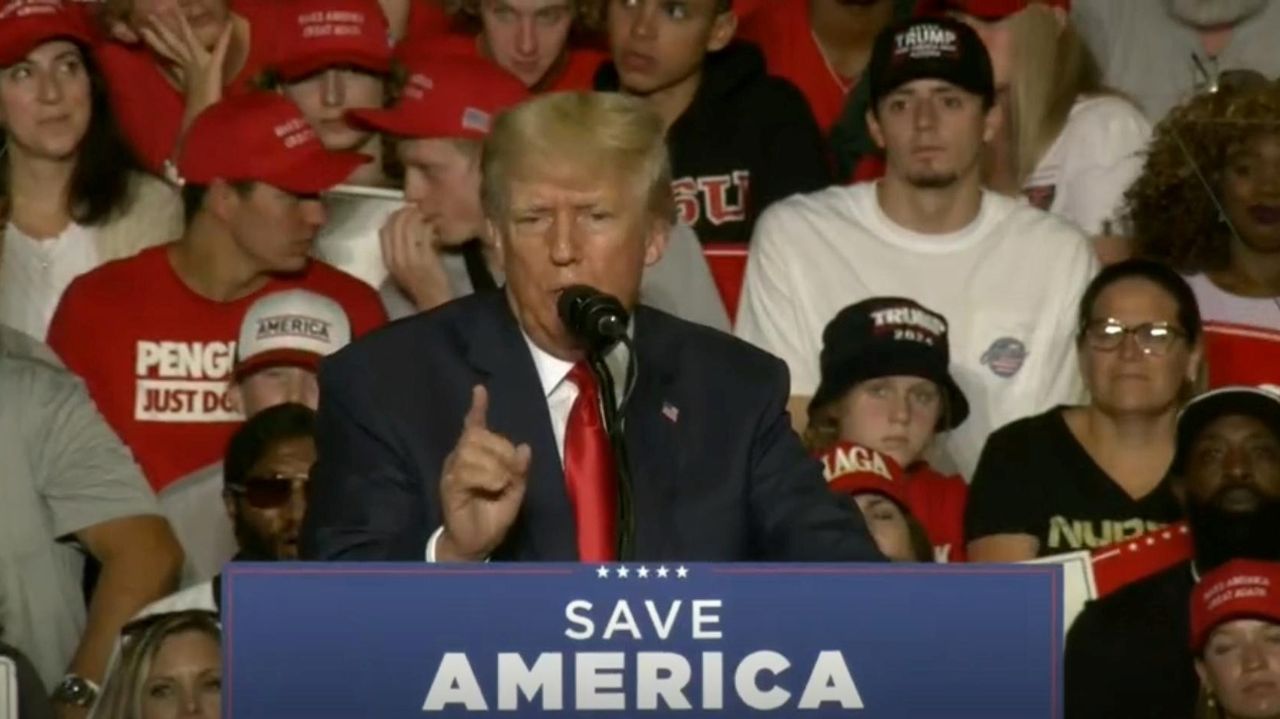 Trump delivers a fascist rant in Youngstown, Ohio on September 17, 2022

In addition to his calls for a “strict death penalty,” Trump rehashed his standard racist and right-wing campaign speech. He grunted that Joe Biden was not the duly elected president and that the “election was rigged and stolen, and now our country is being destroyed.”

Trump blamed “globalist, socialists,” and “liberal extremists” for “waging war on the hard working people of Ohio.” He said they were responsible for “shipping away you jobs” and trampling “on your values.”

As he does in every speech, Trump initiated violence against his political enemies, immigrants and transgender people. He falsely claimed “10 million illegals” were “flooding” across the “Southern Border,” which had been “erased” under Biden. Trump venerated ICE Border Gestapo thugs as “soldiers” and said that under a Republican Congress they would pass “emergency funding to hire thousands and thousands more police officers.”

Despite posting photographs of himself storming the Capitol on January 6, 2021 and recounting in a QAnon themed podcast a week after that he was tear-gassed during the siege, Majewski has yet to be arrested or charged for his role in Trump’s coup.

While Majewski no longer claims affiliation with QAnon, according to CNN between July 2020 and January 2021, Majewski shared QAnon themed content, hashtags and memes over 50 times on his now-deleted personal Twitter account.

In his speech Saturday, Majewski thanked Florida Governor Ron DeSantis for kidnapping immigrants and flying them to Martha’s Vineyard. “Thank you Ron DeSantis. You are a patriot and we love you,” said Majewski.

Like a majority of the Republican Party, Majewski backed Trump’s claims that the election was stolen. He ended his speech saying it was time to “take the country back…Donald Trump is on the warpath to Make America Great in 2024…I can’t wait to be a part of it.”

In an overt appeal to anti-Semitism, Taylor Greene, a self-proclaimed “Christian Nationalist” blamed billionaire George Soros for installing weak “DA’s (District Attorneys)” who “let criminals back on the streets” which she claimed has led to a “record” number of murders.

Vance in running against current Ohio Democratic Representative Tim Ryan. Ryan is a fervent nationalist and supporter of the trade union bureaucracy. He has been trying to position himself as a “moderate” by running advertisements in Ohio boasting of his support for Trump’s tariffs against China while he was in the House.

Max Miller, an aide on Trump’s 2016 campaign and political appointee in the White House, who is currently running in Ohio’s 7th district also spoke at the rally. Like Trump, Miller denounced Democrats for “weaponizing the government” against their “political enemies” and falsely claimed the Democrats were overseeing an “open border” policy. In reality, Biden, like Trump before him, has used Title 42 to deny asylum seekers and deport migrants by the thousands every month.

In choosing Youngstown to hold the campaign event, Trump was specifically seeking to exploit social anger as a result of decades of devastation overseen by the Democratic Party and their adjuncts in the trade unions, who like Trump have blamed foreign workers and corporations for plant closures overseen by Wall Street.

Youngstown is a former steel and auto industrial center located in the Mahoning Valley in northeast Ohio. Along with Lordstown and Warren, Youngstown has been hollowed out after over four decades of deindustrialization. On September 19, 1977, known as “Black Monday,” 10,000 workers at Youngstown Sheet and Tube were laid off in a single day.

The city, once home to over 170,000 people in 1930, mostly working class families, has been reduced to just over 60,000 according to 2021 US Census estimates. With the elimination of thousands of working class jobs, misery has followed. 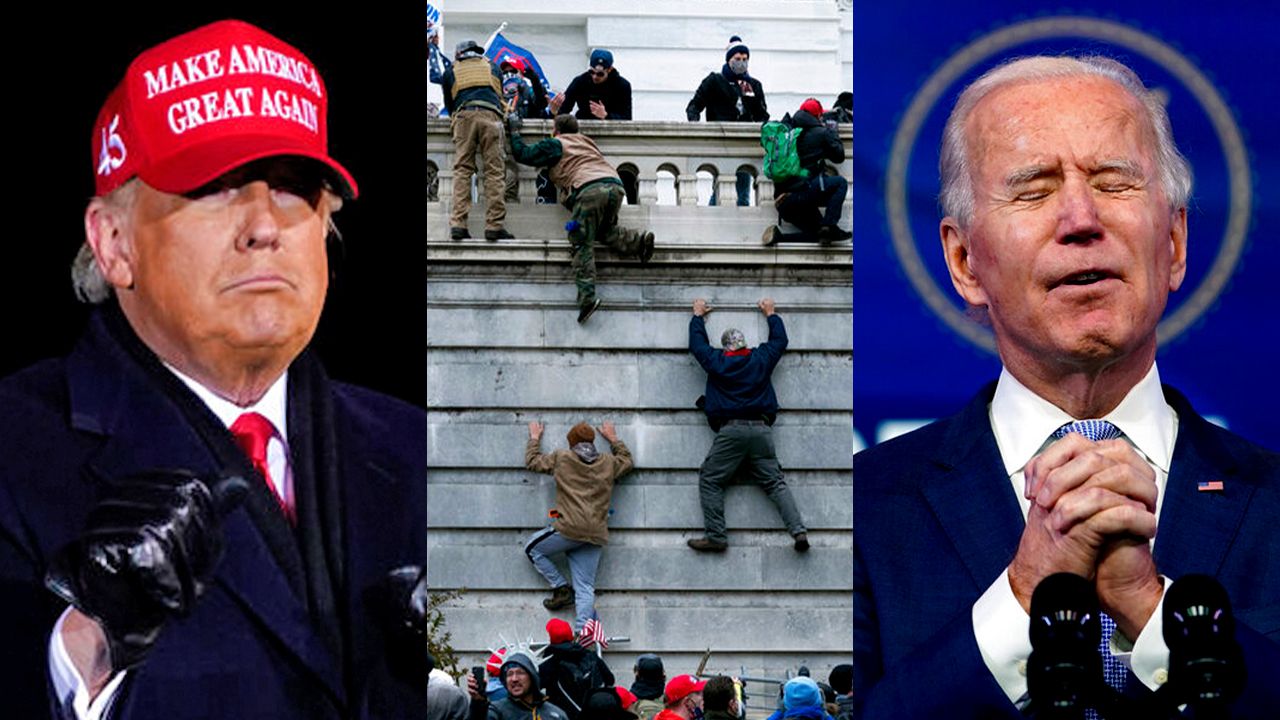 more on this topic

Trump and the danger of fascism in America

The fascist insurrection in Washington DC is a turning point in the political history of the United States.